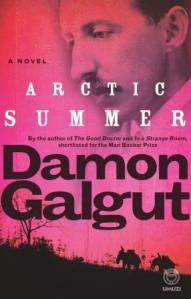 The publication of every new book by Damon Galgut is a literary event par excellence. Two of his latest three novels were shortlisted for the prestigious Man Booker Prize. He is the recipient of many other accolades, including the local CNA Prize for The Beautiful Screaming of Pigs (1991) and the Commonwealth Writers Prize for Best Book from the Africa Region for The Good Doctor (2003). Galgut’s beautifully supple prose, his mastery of narrative forms, and his feel for characterisation always offer a rewarding literary experience. Arctic Summer is no different.

Like Galgut’s last novel, In a Strange Room (2010), Arctic Summer is partly set in India. Galgut’s descriptions of the places his astutely drawn characters traverse are as always a feast for all senses. In many other respects, however, it is a great departure from Galgut’s previous work. Evoking the early life of the British novelist E.M. Forster (1879-1970), Arctic Summer is a biographical novel, focused on its protagonist’s travels to India and Egypt as well as the relationships he shared with his mother and the few men who stirred his love and desire.

It is the time after Oscar Wilde’s trial and exercising caution in the display of one’s sexual longings is paramount to one’s survival. For most of the novel, Forster’s yearnings remain unfulfilled. The struggle to articulate what is one of the greatest taboos of his time and to put his desire into practice – whether in life or his work – takes centre stage in the novel.

Arctic Summer opens in 1912 with Forster on board a ship heading for India where he intends to visit Syed Ross Masood, a young Muslim man to whom he had been a tutor in England. The two men developed a deep, yet often unsatisfying, relationship, which is clouded by Forster’s love for Masood and his heterosexual friend’s inability to respond to his unwanted advances. The trip unfolds in unexpected ways. But it is Masood and the stay in his native country that eventually will inspire Forster’s masterpiece, A Passage to India (1924).

It is only in Egypt during the First World War when Forster volunteers to work for the Red Cross that at the age of thirty-seven he is seduced by a recuperating soldier. Then he meets and falls in love with Mohammed el-Adl, a tram conductor, who despite being also heterosexual and later happily married, allows Forster certain sexual liberties and appears to share his affections.

During Forster’s later sojourn in India he becomes embroiled in a relationship with Kanaya, a barber at the court of the Maharajah Bapu Sahib to whom Forster becomes Private Secretary. Devoid of feelings which he so desperately craves and blackmailed by Kanaya, Forster feels lonelier than ever.

Galgut brilliantly describes not only the precarious situation in which gays, or “minorities” in Forster’s terminology, found themselves at the beginning of the twentieth century, but also the pitfalls of power relations across race and class that accompany Forster’s ventures into the land of mostly unreciprocated love. The subtlety with which Galgut imagines the shifts in Forster’s psyche and the way his discoveries impact on his work, especially A Passage to India, the posthumously published Maurice and the unfinished Arctic Summer from which Galgut’s own title derives, is remarkable.

Even though with this novel Galgut enters the well-established field of fictional author biographies (locally, Michiel Heyns’s The Typewriter’s Tale or J.M. Coetzee’s Foe spring to mind), there is a great risk with imagining the lives of real people, especially well-known historical figures. Reading Arctic Summer, I often had the feeling that it is a novel where it should have been a biography and a biography where it should have been an autobiography. It is specifically Galgut’s dedication of his novel which echoes Forster’s original dedication of A Passage to India to Masood that makes one question the real inspiration and background of Arctic Summer. The parallel suggests that at least some of the emotional and psychological texture which Galgut ascribes to Forster’s and Masood’s relationship in Arctic Summer might have an autobiographical source.

Judging from the acknowledgements, Galgut’s research into E.M. Forster’s life must have been extensive. But like most readers, I’m neither a Galgut nor a Forster scholar, so it is impossible for me to judge where and to what extent the lines between Forster’s life and Galgut’s imagination and own experiences blur. Even more difficult is to define why such “untidy borders”, in the words of critic Ellen Rees, trigger occasional twinges of unease when reading the novel.

And yet, there is no doubt that this meticulously crafted book is a tribute to an intriguing man and his work. A deeply felt, melancholic novel which charts the subliminal links between creativity and desire and brings to life a fascinating literary figure, it is another bright feather in Galgut’s literary cap.