“I remember her tongue sliding into my mouth,” a friend tells me, his eyes sparkling, mischief playing on his lips. A pause follows while everyone around the table is trying to recall their first French kiss. “Yeah, ‘Sugar Man’ was playing in the background,” he says eventually, snapping us out of our respective reveries.

“I wonder how many times you had sex”, Sixto Rodriguez sings in “I Wonder”, one of the songs on his debut album, Cold Fact, which was released in South Africa in 1971. The South African release is the beginning of one of the most incredible stories. Ever.

Years of enthusiasm and dedicated research, countless unbelievable coincidences, and an Oscar-winning documentary later, Sixto Rodriguez has risen from decades-long obscurity to enjoy the world-wide recognition he and his music deserve. 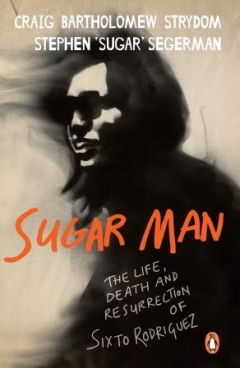 And now, the two men who refused to give up on a crazy idea and started it all, Craig Bartholomew Strydom and Stephen ‘Sugar’ Segerman, have written a fascinating book chronicling the quest.

Many of my South Africa friends have a Rodriguez story to tell. Like Strydom and Segerman, most of them first heard the music in the army. All believed the rumours that Rodriguez had committed a spectacular suicide. But unlike the authors of Sugar Man: The Life, Death and Resurrection of Sixto Rodriguez (2015), they did not set out to find out what exactly had happened to the singer with an astounding cult following in South Africa.

I’d never heard of Rodriguez until I saw Malik Bendjelloul’s remarkable documentary Searching for Sugar Man (2012). The soundtrack immediately crept under my skin. I shed tears of unbelief and joy watching the amazing story.

I cried again every few pages while reading. With infectious passion, Strydom and Segerman offer an incisive behind-the-scenes look at the Rodriguez Saga. Divided in four parts – The Mystery, The Man, The Music and The Movie – Sugar Man: The Life, Death and Resurrection of Sixto Rodriguez is full of gems Rodriguez fans will love, including two generous photo sections. The writing is great, and the beauty of reading the story is that you can slow down at leisure and savour the magic of every step along the authors’ journey.

I met and heard Strydom and Segerman for the first time at the Open Book Festival in Cape Town earlier this month. Listening to them speak about Rodriguez and their involvement in his story was magical, reliving it all once more through Sugar Man: The Life, Death and Resurrection of Sixto Rodriguez even more so. Their generosity, die-hard dedication and integrity (there is no glossing over the difficult bits in the book) is truly inspiring.

Malik, who heard the news with Brittany by his side while on a trip to Los Angeles, was finally able to exhale. It was as if he had been holding his breath for four years. He was now only one step away from the moviemaking’s greatest accolade. Craig went for a long walk after the announcement, remembering his statement to his army friends in 1984: ‘I am going to find out what happened to Rodriguez.’ His words may have dissipated into the ether, but they had been the genesis of an idea. An idea that was later energised by the liner notes of a CD and eventually realised. Now, thanks to an indefatigable Swede and a young record dealer who literally begged for the rights to re-release the music of the rock star who never was, that idea, that story, was world-famous. And so, at long last, was the withdrawn poet-sage-musician-activist who started it all.
(Sugar Man: The Life, Death and Resurrection of Sixto Rodriguez, 234-5).

For all Sugar Man news: The Official Rodriguez Website

1 thought on “Sugar Man: The Life, Death and Resurrection of Sixto Rodriguez by Craig Bartholomew Strydom and Stephen ‘Sugar’ Segerman”