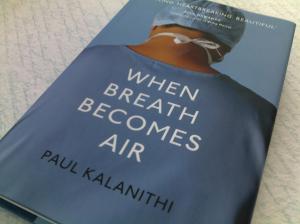 Reading dead authors is not unusual, but opening the late Paul Kalanithi’s When Breath Becomes Air feels different. He wrote it knowing he was dying and it was published by his widow a year after his death. The immediacy of the knowledge is uncannily palpable. For me, the experience was even more intimate on two different levels. Firstly, I also had a cancer scare recently and Kalanithi was my age when he died. In retrospect, his memoir made me count my blessings, again, as I am healthy and have escaped with just a fright. Secondly, like me, as a young person he struggled to choose between two vocations: medicine and literature. Unlike me though, he chose medicine. But literary longings had never left him and when life became unbearable, like many of us he found some amount of solace in the written word.

The striking title of the book derives from lines of an Elizabethan sonnet: “You that seek what life is in death, / Now find it air that once was breath.” To contemplate it alone is already an experience in itself. In the forward, we are told: “Be ready. Be seated. See what courage sounds like.” Can one ever be ready for death? I doubt it, especially not when at the age of thirty-six, with the most promising medical career ahead, you look at a CT scan of your lungs and become aware that they are riddled with tumours.

At this stage of his life, Paul is about to complete the decade-long training necessary for becoming a professor of neurosurgery. He is married to Lucy, also a doctor. Because their relationship is strained, he does not know at first how to break the dreadful news to her.

When Breath Becomes Air tells Paul’s story before and after the lethal verdict. We see his aspirations taking him to the heights of what is possible in his field. Every day he is confronted with illness, decay, and death – of others. He is constantly challenged to question what makes life meaningful. Some of the descriptions of his daily routines as a medical student and doctor are not for the faint-hearted. Even less so is the narrative of him becoming a patient. It is gut-wrenching to realise how the potential Paul had worked so hard to build will “go unrealised”. With searing honesty, he describes his attempts at making the most of the time left at his disposal and the ambition that drives him in the face of ultimate defeat. He writes how, paradoxically, the illness heals his marriage, and how he makes the courageous decision to become a father to a child who will most likely not remember him. Knowing that his words will outlive him, he writes the book.

When Breath Becomes Air is published with a beautiful epilogue by Lucy, “his wife and a witness”, who carries on with “love and gratitude alongside the terrible sorrow, the grief so heavy that at times I shiver and moan under the weight of it.”

1 thought on “Review: When Breath Becomes Air by Paul Kalanithi”