This time it was rage. No melancholy insomnia, just a big fat stick of fury ready to explode, the fuse much too short. I had been so livid that I walked around wanting to headbutt people, especially myself for being… well, not wise, to put it mildly. A volatile state. And once again Jack arrived, all in black, mattress-pressed, and ready for another clandestine rescue mission. He has a knack for showing up when most needed. Ryno sent him. A clandestine mission expert himself, Ryno is my publicist and friend, aka Work Husband, and he knew how much I coveted Reacher #21, Night School. When the proof copies arrived in his office, one was rushed off to me. And so I went back to night school with Jack and learned some valuable lessons about his rules. Recently, I had failed to follow one, and paid dearly for disobeying. Jack knows how to trust his gut feelings, follow his instincts, analyse, predict, outsmart, wait – patiently – and strike when least expected. Night School is vintage Reacher, all tension, wits and charm. Frances Neagley is back at his side. And oh, that crisp writing which seduces me every time. Yes, all men want to be like him, all women want to… Obviously! Because:

“…her hands flat and open, her palms close to the bed, hovering, skimming a cushion of air, as if she was balancing.” 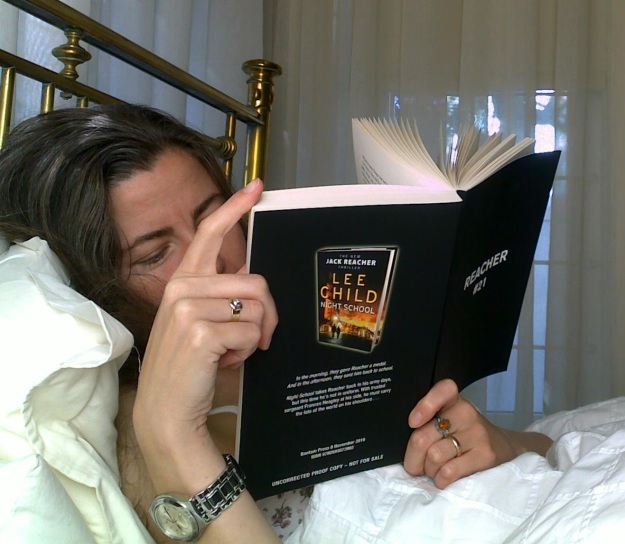 In September, Andy Martin, the “gonzo academic”, author of the must-read Reacher Said Nothing, is one of the international Open Book Festival participants in Cape Town. If you are a Reacher fan, or a surfer, come and listen to him talk about both.

In October, the second Jack Reacher film is released, based on Never Go Back.

Night School will be published on 8 November 2016.

4 thoughts on ““That’s what friends are for””