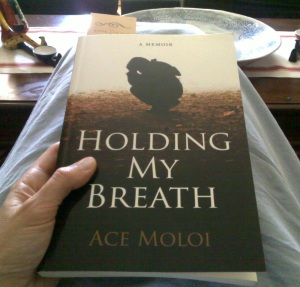 Holding My Breath by Ace Moloi is a heart-wrenching, deeply inspirational grief memoir. Written in the form of a letter addressed to Moloi’s late mother, it tells his story before and after his mother’s death. He writes in the Prologue to the book: “I have decided to break the silence between us. I am starting this conversation to remind you of your younger son and to update you on my life.” Moloi points out that mourning is like learning a new language – “the language of living without you.” His mother died of an unexplained illness when he was thirteen and left him and his older brother to fend for themselves. Their father was absent when they were growing up. The boys had to rely on other family members for support. They encountered abandonment, hunger and despair as the divided family was mostly incapable of caring for them.

Moloi tries to hold on to the memory of his mother for guidance: “Through the power of your narratives, we were able to piece together the fragments of our history. You empowered us by interpreting events and people to provide a larger picture of who we were. And with every laugh, every remark, every shake of the head at your too-good-to-be-true stories, we forced the universe to take us seriously.”

Moloi is bright and talented, but without the support of a nurturing family for most of his young life, it takes an immense amount of strength and courage for him to get through school. He graduates in the top one hundred students of his province. Eventually he manages to enrol at university and with the help of a bursary completes his studies: “I fixed my concentration on defying my history by finishing school and going to university. I was tired of living with a false sense of family. I needed to work hard so I could start my own family, throw off the reigning curse and set a new generational trend.”

However, the cycles of rage and violence catch up with him. He unleashes his anger at those closest to him. In a moment of utter desolation, he attempts to take his life. His faith helps to anchor him, and he begins keeping a journal. As a student, he excels at a university newspaper and as a student leader. He tries to reconnect with his father, but realises that not having him in his life might have been a blessing in disguise.

Despite all the adversities he faced, Moloi continues making a name for himself as a communicator and writer. He wants a different future and understands the significance of his success not only for himself, but also for others facing similar hardships: “My village needed something to boast about. The kids playing in the dust needed a role model. Their fathers had abandoned them. Their fathers were drunkards who beat their mothers. They were orphans. Their families divided. They needed me to prove to them that it was possible to disobey history and break the curse of poverty and despair.”

Holding My Breath: A Memoir