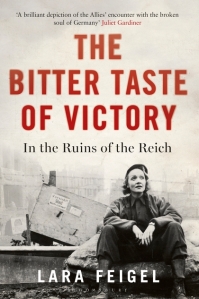 Lara Feigel is a cultural historian and a literary critic, combining her interests to write about the meeting point between life, literature and history. In her last two books, she looks at how people whose quintessential purpose in life is the search for beauty and meaning survived their antithesis: war. In her The Love-charms of Bombs: Restless Lives in the Second World War (2013), Feigel wrote about five authors who were based in wartime London, driving ambulances, fighting fires, being creative, and loving passionately while desperately trying to remain alive.

In her latest offering, The Bitter Taste of Victory: Life, Love and Art in the Ruins of the Reich, Feigel picks up where she left off in her previous book, at the end of the war, and introduces a new, larger cast of characters – writers, intellectuals and artists – who were sent by the Allies to defeated and occupied Germany to assist in denazification and rebuilding the nation they had been trying systematically to annihilate over the past few years.

Their idealistic mission is an opportunity like no other, placing cultural activities at the centre of the plans to reconstruct the country. For a brief moment in history “a new united Europe, underpinned by shared heritage that would allow nationalism to be replaced by a common consciousness of collective humanity” seems like a viable option for the continent’s future.

Germany is a wasteland. Poverty, hunger and despair rule. Survivors grapple with guilt. Exiled German writer Peter de Mendelssohn arrives to establish newspapers in the British zone. He notes that “new eyes” and “totally new words” are needed to describe the devastation.

The horrors perpetrated in the concentration camps come to the surface of the world’s consciousness, and with them questions of complicity, responsibility and justice. In the light of the revelations and the Germans’ lack of immediate repentance, the Allied artists and reporters sent to the country find it nearly impossible to “make sense of the postwar world” or to emphasise with the people they encounter.

Among them is the photographer and war correspondent Lee Miller. After a visit to Dachau, she photographs herself in Hitler’s bathtub. Like others, she is “troubled by the ordinariness of Nazi leaders.” German-born Hollywood star Marlene Dietrich, “in army uniform, low-voiced, funny and adoring” has to face the fact that her family members collaborated with the Nazis.

Eerily echoing our own, this is the time of the Nurnberg trials, the nuclear bomb, migration, displacement and rising tensions between the other ideologies taking hold of post-war Europe, resulting in the division which will most strikingly manifest in the Berlin Wall. A sense of failure and helplessness sets in. But Feigel ends her brilliant portrayal of this turbulent period with Austrian-born Jewish American filmmaker Billy Wilder who “was able to laugh off the bureaucratic absurdity of communism, the megalomaniac blindness of American imperialism, and the fascist conformity of the Germans by satirising them all in equal measure” and standing “defiantly on the side of life.”

The Bitter Taste of Victory: Life, Love and Art in the Ruins of the Reich