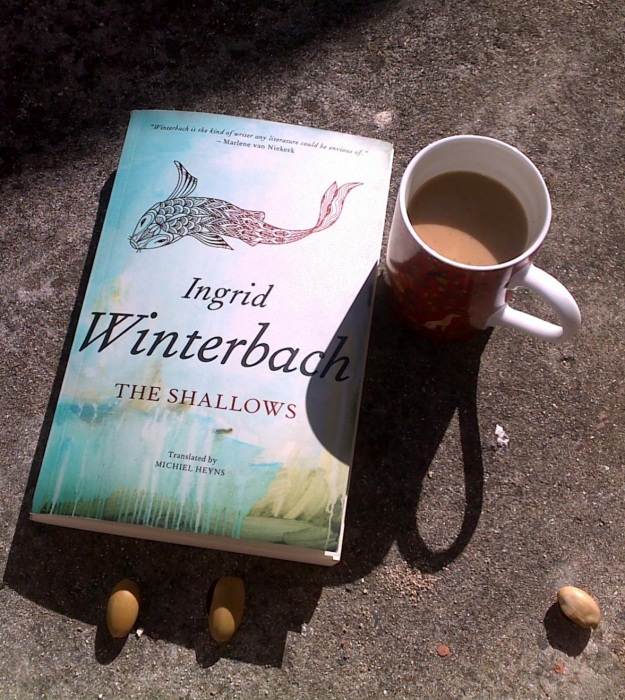 “Winterbach is the kind of writer any literature could be envious of” – Marlene van Niekerk is quoted on the cover of The Shallows, Ingrid Winterbach’s latest novel translated from the Afrikaans into English. The original, Vlakwater, was published in 2015. One of South Africa’s most distinguished novelists, Winterbach is the author of ten other highly acclaimed novels, five of which are also obtainable in English. Anyone who has engaged with her work will understand what a privilege it is to have it available in translation. She is a quintessentially Afrikaans, South African, writer; her narratives are deeply rooted in the local consciousness. However, their appeal is truly universal. The stories she tells, the way she tells them, remind me of authors like the American Siri Hustvedt, or the Pole Olga Tokarczuk, or the Israeli Etgar Keret. They come up more easily for comparison than other compatriots. In fact, the only writer I can think of locally whose work displays a similar storytelling intuition is the translator of The Shallows, Michiel Heyns. The supple prose of his translation testifies to the perfect match.

Winterbach once spoke about her novels as not being plot-driven. She compared writers to sea creatures: some have impressive, strong fins with which they propel themselves through the twists and turns of the novel’s plot; others develop short flippers that serve similar purposes, but perhaps less obviously and with fewer display tendencies. She felt she belonged to the latter group. Despite the title of her latest novel, Winterbach’s powerful flippers in The Shallows take the reader into the deepest waters of what it means to be human, especially a creative being, in our contemporary world.

The novel begins at an undertaker where two people go to view the body of a deceased friend: “The time there was sacred. That is how I see it in retrospect.” The woman telling the story confesses on the first page: “In the course of my life I’ve done irresponsible things. I have at times been dishonest and unfaithful. But I am loyal to those I love.” She is one of a stellar cast of intriguing, if not bizarre, characters we encounter in The Shallows, and Winterbach is a master of characterisation: “I was born with a cleft palate and a harelip. I have a broad, flattish nose, a narrow forehead and hair as abundant as that of a Catholic saint… I couldn’t drink properly as a baby and I had trouble learning to talk. As a result I was a furious and frustrated child.” The nameless narrator adds: “People of both sexes find me sexually either irresistible or repulsive.” After the death of her friend, she decides to write a monograph on the famous Olivier twins whose moving-image work has conquered the international artist scene. For the book, she interviews the brothers’ father with whom she shares a dark past.

Her narration is interspersed with the story of Nick Steyn, a painter who moves from Stellenbosch to Cape Town after separating from his long-term partner. He takes on a lodger, Charelle, a young promising photographer with whom he develops a tentative friendship. He also becomes friends with Marthinus, one of his neighbours, after discovering a pig belonging to the man roaming in his garden: “Side by side they stood on the stoep contemplating the creature. A big, black pig serenely grazing.”

Over beers and obscure masterpieces of world cinema, Nick and Marthinus exchange recollections of a man they both knew in the past: the writer Victor Schoeman who disappeared from their lives under suspicious circumstances. Victor is the author of a book – the titular The Shallows – which suddenly begins to resonate in the events happening around Nick and Marthinus: “Just look at The Shallows, Victor liked unusual angles, he liked complicating things, he liked unexpected twists, he liked ambiguity, he liked to shock and intrigue.” They suspect that Victor is masterminding, or is at least somehow implicated, in the strange coincidences occurring in their lives.

One day, Charelle disappears without a trace and the notorious artist Buks Verhoef makes an offer on Nick’s house. Soon after, Verhoef is shot in a coffee shop in Stellenbosch. He dies in the arms of the nameless narrator we are introduced to on the opening pages of Winterbach’s delightfully peculiar novel – the other The Shallows we are holding in our hands.

Winterbach is never afraid to take risks, to experiment with form and style. Her work provides intellectual and aesthetic pleasure. She challenges her readers: makes us think and cry and laugh. There are moments of sublime tenderness in her narratives which take your breath away, and all you can do is sit in silent wonder, marvel at the ordinariness and the mystery of our reality unfold right in front of our eyes. None of it is contrived.

There is a scene in the novel where Nick remembers the last trip with his former partner: “Isabel had one day, sitting across from him in the museum cafeteria, suddenly interrupted her bitter diatribe and said: Console me. It was so unexpected that he didn’t know whether he’d heard her aright. Console me, she said again. He was caught unawares. They looked at each other. He didn’t know what to say. She looked down. She’d seen his incapacity. There were tears in her eyes. She got up.”

In contrast, Winterbach’s writing has the astounding capacity to console, to find meaning in a meaningless world.

Review first published in the Cape Times on 31 March 2017.

3 thoughts on “Book review: The Shallows by Ingrid Winterbach”