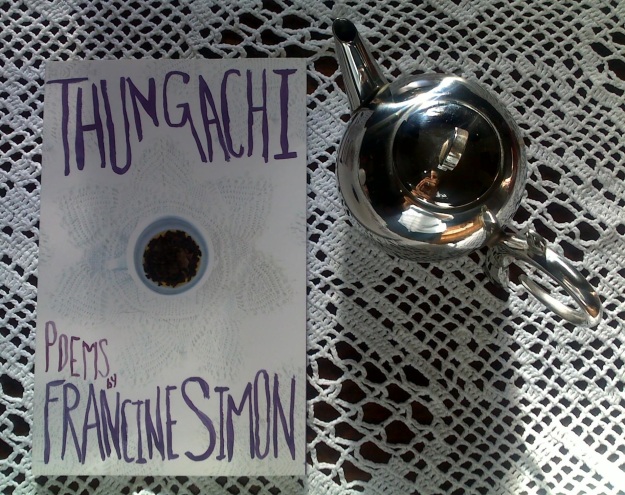 A cup of tea contains many stories. There is one on the intriguing cover of Francine Simon’s debut poetry collection, Thungachi. Simon hails from Durban where she was born into an Indian Catholic family, a heritage that infuses her poems about myths, family, language and religion.

The collection opens with “Naming Places” in which the poet recalls the distant past, the time “they came on the boats”, and explains that “since we don’t know / my father’s family / we are the last of the Simons. // Nothing left for his daughters / but to be girls.” But like the biblical Adam, Simon is claiming and naming her domain, as poet and woman. Deeply embedded in the culture of her community, the poetic persona of poems like “Tamil Familiars” evokes her grandmother’s and mother’s superstitions only to ignore them: the curry-leaf tree which is supposed to die when picked from at “that time of the month” is standing as strong as the “I” of the poem who eats straight out of a pot even if it might bring rain to her wedding day: “I never give a thought / to my wedding.” (In a note on the poem, Simon comments that it is most likely to rain in Durban that day anyway.)

“I”, with only a dash to follow, also emerges at the end of the poem “Rati”, in which the mythical story is retold as a background against which to define oneself. In “Tea”, the ways of serving tea at home are described in detail: “Tea is my job. I know it well.” But once again the “I” sets herself apart from her family’s traditions: “I take tea but never drink it. / You can always find a cold cup / and know it’s me.”

In “Gathering”, there is a sense of the past being put to rest: “All are broken clocks / and candle stumps. / Dust, watching / in a settlement.” These images contrast with the exuberance of “Nanni-ma”, which opens with the lines “I think of sex and only / sex since he / became my neighbour” and ends with “in my doorway at night / asking to eat from / my chilli tree.” Or the devotion of “Vetala-pachisi”: “and when you lit that candle / it was hard enough to ask so instead you burned // Hail Marys into your hands.”

Simon is not afraid to push the boundaries of poetic forms. She experiments with abandon and takes the reader into unfamiliar territories. In this respect, not all of the poems in Thungachi were my cup of tea, but they fascinate and force one to engage with more care, refining one’s palate. The Notes at the end of Thungachi are a wonderfully inventive part of the collection and should not be skipped. They add texture and spice to the poems they comment on. And thus the ending of “Little House” encapsulates Simon’s deft, purifying touch: “Nothing here, / only dust // on our words in want of a wiping hand.”