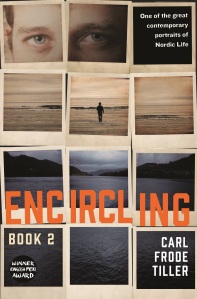 The second instalment in Carl Frode Tiller’s Encircling trilogy, this novel follows the predecessor’s structure by allowing three different narrators to tell us about their lives around the month of July 2006 in the small Norwegian town of Namsos. While they relate their present-day stories in occasionally minutiae detail, they also reveal more or less relevant facts about themselves through the letters they write during this time to David, a man they all knew at some stage in their lives. They respond to a newspaper article in which David, supposedly suffering from amnesia, asks those who knew him to help him regain his memory.

In the first of the three books, his two teenage friends and his step-father contact him. In the second, it is Ole, a farmer from the same municipality; Tom, another close friend from his childhood; and Paula, who lives in an old-age home and used to be friends with David’s mother. Paula is assisted by Harald, who has his own reasons for wanting to write to David. The individual narrators assemble a collage of partly overlapping, but also partly conflicting stories, and the enigmatic young man they all refer to moves in and out of our focus. It gradually transpires that not only are the memories and motives of the storytellers unreliable, but perhaps a lot more is at stake and not entirely as it seems.

The first part of the trilogy was published in Norway a decade ago and has garnered much acclaim. Carl Frode Tiller has been compared to the likes of Karl Ove Knausgaard. His descriptions of contemporary life in Norway intrigue, but it is the depiction of universally recognisable everyday misunderstandings and cruelties between people that I found most gripping. Although at times over-written for my liking, some of the situations narrated were stunning in their portrayal of how we fail at communicating our intimate, crucial truths. The last of the books is supposed to be published next year and I am most curious to find out how the trilogy will end and what it will reveal about David and the people who address him.

Review first published in the Cape Times on 22 September 2017.