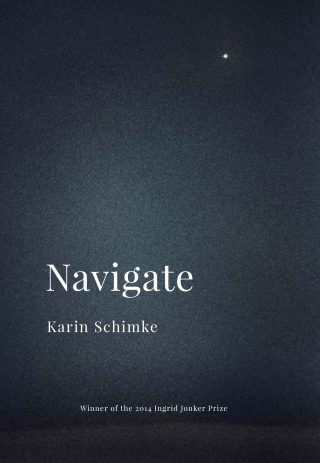 Anyone who has read Karin Schimke’s Bare & Breaking, for which she won the prestigious Ingrid Jonker Award in 2014, will be delighted to know that her second collection of poems is now available from Modjaji Books. Navigate is sublime. Schimke’s poems steer between memory and loss, beauty and hurt, while forging a path to understanding, joy, holding on.

The poem Smoking remembers the house that was “my aunt’s speck of planet”. The woman’s existence continues beyond her life in the poet’s fragile words: “This is how dead people live on: / smiling in a shaft of memory / with smoke wreathing their heads. / A herald of hindsight.”

The volume opens with an image of “my father” removing a splinter from his daughter’s foot, the process full of kindness: “However / long it took, however sore / it was, losing the splinter / was always a loss.”

The mood swiftly changes in the following poem where the memory is of impatience and boredom on the part of the observer who is in a workshop, where “The day had whined and hammered too long.” Violence follows: “You grabbed me by the hair.” The impression is that the people involved are the same as in the previous poem, the father and his daughter. And that the immigrant of the next poems is the father, whose sense of orientation has been overthrown by migration, “When the stars are upturned” and “The immigrant belongs to nothing but his hands.” The same loving hands which can attend to a stuck splinter, repair what is broken, or offer the daughter safety as she learns to swim, can simultaneously cause pain.

The collection returns to the image of feet and hands in Superstition, where the roles are reserved as the poetic I is the one offering comfort to the you of the poem who is lying helpless in a hospital bed, machines keeping the body alive. The feet are “uninvaded territory. They’re / useless to these intricate calibrations. / But your feet are useful to me. / I can hold them and imagine / I’m steering you back here.” The confrontation with death and frailty of a loved one continues in the following poems, Do you remember the time when so many people we knew were dying? and Cleaning the wound.

The sequence of the poems tells a compelling story. It is clear that the internal compass needed to “navigate” is as upset as the external one. Home is a mere suspicion (The existence of home) and belonging must be questioned, specifically in our socio-historical context which requires extreme sensitivity: “Belonging is as delicate as a machine: / one foreign speck of dust makes each part / question itself. You must keep the system clean.” In a note to The Shasta daisy’s native range, we learn that the flower “grows from seed like a classic perennial. But once established, it is permanent and never invasive.” The immigrant father “loved those Shastas”. They demanded “little” of him, “how compliant they were. How / attractive their simple perennial solace.”

The garden is full of Shasta daisies, other plants and fertile memories, but the next poem, Hybrids, classifies: “You never planted your bones here… You grew hybrid languages and hybrid children. / Unlike God, you were not pleased.”

The poet is a creator, too. Time flows; change is inevitable. In the four poems which make up Praxis – four steps to understanding change, Schimke captures the nature of transformation which acknowledges the part-futility and part-uncertainty of the process. The final result cannot be asserted with confidence. The word “maybe” – in parenthesis – precedes the final stanza of the quartet in which the woman who was once a little girl is watching out in anticipation: “for the forgiveness / that comes before an apology / or to marvel that she was grown / and was seldom afraid now.”

Doubt enters the equation. The seven poems – or “songs of self-censorship” – of Taped beak are heart-wrenching, especially in the context of the poem which follows them, The things they do not tell you, when “Unspeakable things were happening not far away” and were impossible to process at the time by an eight-year-old “you”. The poem Then why establishes the purpose of trying to carve out a space for creativity among binary codes: “we make, / that’s all. the pen / the brush the drill / the wood the tool / the trowel, your hand –” and when the pain of it all is questioned, the answer is simple: “it hurts, i said. / here, she said, / pouring ink / into my palm. // it’s medicine.”

Life is a journey, they say. It’s easy to get lost, especially in treacherous or dreamlike territories far away from everything familiar. “I will have to eat stars to be guided back”, says the first line of When I finally get to Bhutan, the penultimate poem of Navigate. But, it is the simple gestures of tenderness that return us to the safety and belonging of home, as Schimke reminds us in The first time we went for a walk. The beach walk along a metaphorical “cosmological crack” ends on a “wooden deck / where a wind rustled and you dusted / sea sand from between my toes. / My feet were at home in your lap.”

Review first published in the Cape Times on 23 March 2018.