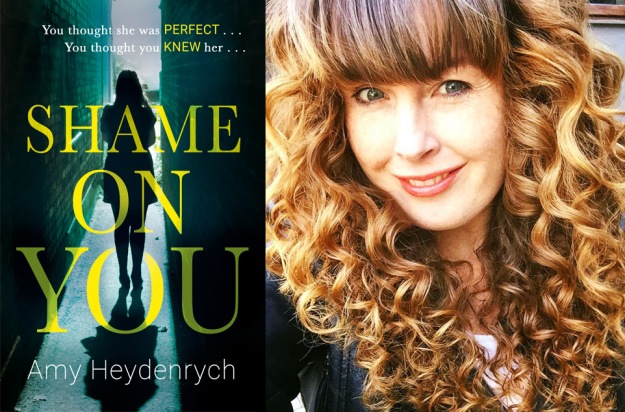 Amy Heydenrych has been writing for many years in different capacities, but Shame on You is her first novel. It was snatched up by a highly regarded UK publisher in a two-book deal last year. It is topical and edgy, qualities one expects from a psychological thriller. The protagonist, Holly Evans, is a social media sensation, one of those public figures whom we have come to identify as “brands” or “influencers”.

For all its wonders, the Internet is a scary place that makes terrifying things possible at the click of a button. Its seeming anonymity brings out the worst in human nature. And like millions before or after her, Holly can’t resist its pull. She is known as a cancer survivor and a devoted proponent of super healthy eating. Her followers adore her. Companies are falling over themselves to attach their brand to her name. Everything she has – the luxurious flat, the nice car, the fancy clothes and the latest beauty products – comes from lucrative sponsorship deals. Her image is everything.

But it about to be destroyed by a man who wants her to suffer at all costs. In a moment of carelessness, when Holly lets her guard down, she is attacked in the most brutal way. She immediately realises that the assault is an act of revenge, but she is scared to cooperate with the police because she does not want an investigation into her life to reveal all the secrets she has been desperate to hide for many years. And whoever is out there baying for her blood seems to know more about her than she cares to contemplate. “She should have known that secrets make you sick,” the narrator tells us about Holly, “that they have a way of coming back to haunt you.”

Set in London, and written from the perspective of both Holly and her attacker, Shame on You goes into the heart of everything that is sickening and dangerous about the online world. Heydenrych presents us specifically with the pitfalls women face in this precarious space, particularly when their engagement with the social media community goes horribly pear-shaped: “Up, down, up and down. The pornography that is public shame. They came here for a train wreck. Well, here she is, in all her filthy glory.”

Although I would have preferred a tighter edit – more showing, less telling – Heydenrych’s debut is a page-turning read from the shocking start to the final cliff-hanger. Both her main characters have hardly any redeeming features, but the fact that we want to know everything about them exemplifies the addictive nature of our fascination with the online/offline presence of the rich and famous. Shame on You is making me reconsider the way I use social media platforms, as a content producer and consumer. Above all, the novel sheds light on a disturbing phenomenon which has the potential to make or break lives in the twenty-first century and should never be underestimated.

Review first published in the Cape Times on 24 August 2018.