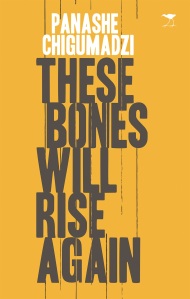 In November 2017, the “coup that was not a coup” in Zimbabwe held the world’s attention as the seemingly impossible became reality: after decades of rule, Robert Mugabe was ousted from power. These Bones Will Rise Again by Zimbabwean-born journalist and novelist, Panashe Chigumadzi, is an incisive exploration of these events and the author’s personal response to the historical moment as it unfolds as well as the past that shaped it: “The struggles over history are complex, because the present continuously slips into the past, marking history as always ambivalent, incomplete, a work in progress.”

Chigumadzi interrogates the way we remember. She is acutely aware of language and storytelling as a way of preserving memory and belonging. “In search of those answers, I must lower my eyes from the heights of Big Men who have created a history that does not know little people, let alone little women, except as cannon fodder”, she writes and decides to listen closely to what the bones of her female ancestors have to tell and teach her about her own life and that of an entire nation.

Reading other black women, she confronts “the unflinching stories of our mothers and grandmothers and aunts and sisters” and wonders for the first time “what did it mean for a black woman to be in my grandmother’s time?” She interviews the women in her family who are still alive and mourns the ones who had passed away too soon. Those who “refused their place in time” are returned to history.

Growing up between Zimbabwe and South Africa offers Chigumadzi a fascinating perspective. I am writing this review during the social media shutdown in Zimbabwe. It is voices like Chigumadzi’s that guide us through times of uncertainty. These Bones Will Rise Again is an inspiration.

These Bones Will Rise Again

Review first published in the Cape Times on 25 January 2019.