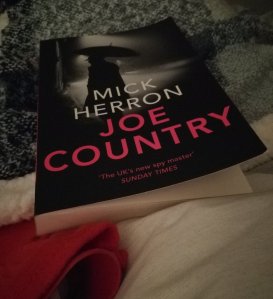 There aren’t really many among the cast of characters in Mick Herron’s Jackson Lamb spy thriller series that you would want as a friend. On the whole, they are a bunch of losers. It’s almost always certain that they’ll either let themselves or their colleagues down. Yet, you can’t help but follow their (mis)fortunes with feverish anticipation.

Judging by Herron’s previous books, he has never been reluctant to kill off one of Lamb’s slow horses, as the Regent Park’s spy rejects are called. So when it says on the cover of Herron’s latest that “they’re heading into joe country” but “they’re not all coming home”, and the first chapter ends with two people being dead and Slough House needing “some new slow horses”, you suddenly begin picking favourites and calculating who you could bear to lose as a character. And so, it was with a sense of heavy foreboding that I started reading Joe Country. Until the very end the tension was nerve-wracking.

“Lamb had been given Slough House, and had been squatting here since, a grim overlord to the Service’s washouts”. The latest addition to his stable is Lech Wicinski. Officially, he has committed an unforgivable crime, and since he can’t prove otherwise, his life turns to hell. Meanwhile, the wife of one of the previously killed slow horses reaches out to Louisa Guy for help in finding her missing adolescent son. What at first looks like a straightforward runaway tale turns sinister when an old enemy shows up and once again threatens to spill slow horse blood.

With his wicked humour and masterful suspense build-up, Herron has once again given us an irresistible thriller. Just when you think he can’t get better, he does and makes you care about his Slough House misfits more than you ever bargained for.