My “Pratley Putty Standard Setting” went on a mission to the moon. According to the package. I have no reason to doubt it, because my pool is no longer leaking. I feel like Tom Hanks in Castaway.

“I have fixed the leaking pool!”

But before this wonderful discovery, I woke up quite early and, not being able to open my eyes properly, I lay around for a while, listened to the 6am news on eNCA, and fell asleep again. And slept until way past 8.30am, which doesn’t happen often. Salieri was not amused. She is used to earlier breakfast times. During that short morning sleep, I had terrible dreams in which I was screaming at people in a long queue outside of a supermarket not abiding by the rules of social distancing: “You are going to infect us all and we are all going to die!” I don’t ever scream in reality, so this was just as unusual as the long sleep, and perhaps just as necessary.

Coffee. I am predictable that way.

But then: a walk in the garden, in my night-time finery, bathrobe and witch’s hat. As one does. That was when I discovered that my pool was okay again. 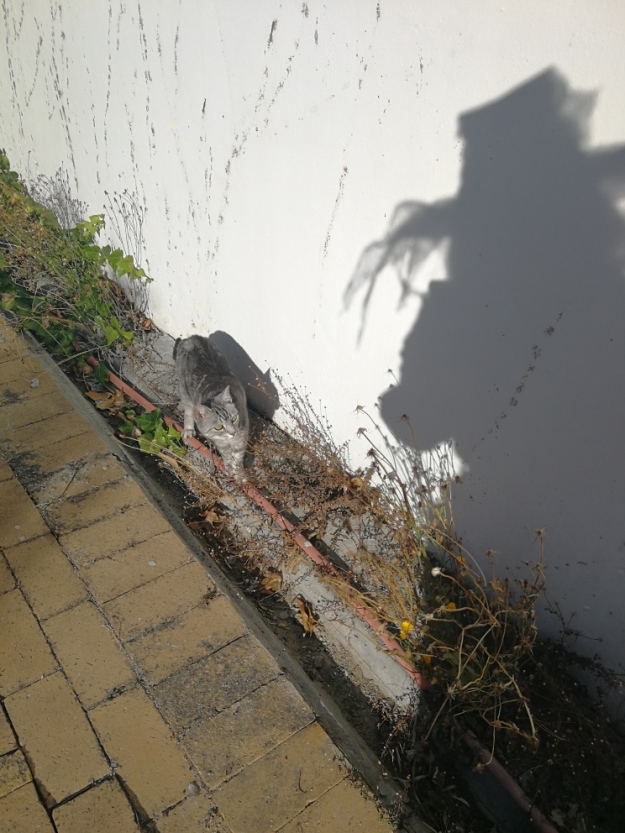 The cats were surprised to see a witch in the garden, but they are beginning to understand that it will take a lot to preserve our sanity in these days.

Apart from the wild feline life, some lovely things were spotted in my wild garden. The hibiscus growing on Anya’s (Mozart’s sister) grave is blooming again. As is the lemon tree. 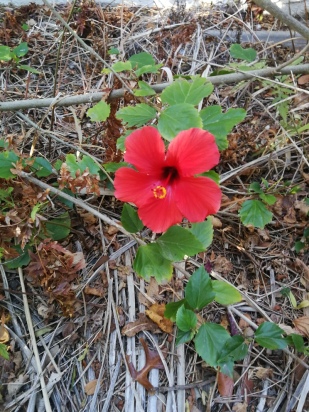 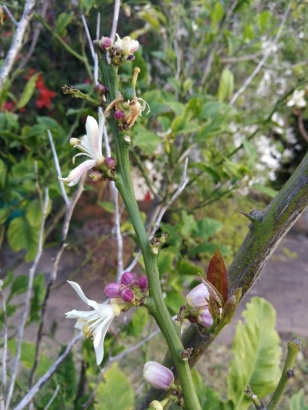 And when I say my garden is wild, I mean wild. 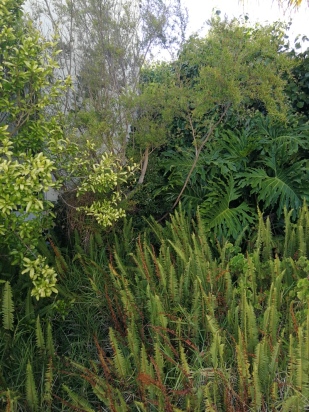 Back to bed and reading. Until just after noon. My eyes have started hurting from all the reading, so I decided to execute an idea I had just before the lockdown, garden loop walking: out the door onto my stoep, down four steps, towards the property’s entrance gate, left, up four steps, back to the stoep, continue on the stoep and start all over again. I knew that I would swim eventually, so I did not bother to get dressed properly, put on my swimming/sunbathing outfit and walking shoes only, and off I went, marking each loop with a leaf found in the garden. About thirty minutes in total.

On my walk, I heard birds and discovered a nest in my garden I did not know existed. There were bees. And – Sally, don’t look now, if you are reading this – the spiders are back. They seem to return in full force every few years. There was also a big rat in the small palm tree, showing the Szczurek (= ‘little rat’ in Polish) that she was not alone! 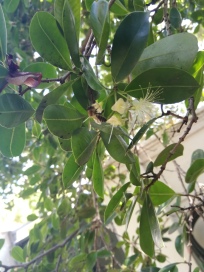 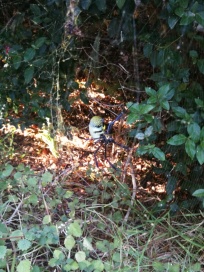 Lunch was chicken soup leftovers. I hate wasting food in the best of times, but doing it now would be obscene. I shudder to imagine how much food from the reckless stockpiling will end up in the bins…

Despite being an orchid whisperer, I don’t have green fingers. My Mom has, but not me. But I decided to try to plant and nurture two things during this time, something for the cats and for me (catnip & coriander).

That was done after lunch and before swimming, sunbathing, more reading, drinking beer, being forgiving towards my neighbours still hammering away on one side and playing DJ on another. When silence returned, I fell asleep. It might have been the lovely combination of sun and the beer too. 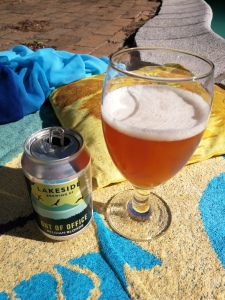 It was finally time for some work. Not much, just some. Earlier in the day, Richard de Nooy challenged us to disclose our quarantine nicknames.

I am not Lazy Chevre for nothing.

I bought the chevre at the Peregrine Farm Stall at the beginning of March. It reminded me of the Elgin Valley and how much I have come to love that place, its people and its wines and all good things, in the last three years.

At dusk, the light was so gorgeous and it was so perfectly wind-still, the longing to go out for a walk around the Rondebosch Common was overwhelming, but the Common, the Mountain, the Sea – they are patient creatures and they will be waiting in all their glory for when it is safe for all of us to go out there and be again. It is just a few weeks. Today, I was also flooded by memories of the refugee camp in Traiskirchen, where we were placed under quarantine in 1987, when my family sought asylum in Austria. A different time, a different world. And yet…

Dinner was a simple affair. Pasta, a glass of Jordan’s “The Long Fuse”, a gift from my love for the lockdown. 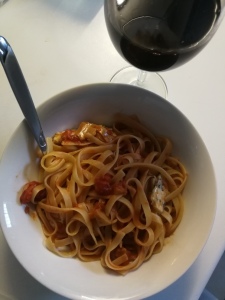 I hope to meet on Skype with an Italian friend living in Vienna before sleep tonight. I recently reviewed an academic book of essays in which one of the contributors quoted her and it made me smile. A small world. Smaller than ever perhaps. And yet, it is still all out there, surviving, waiting for a gentler return.

Be kind to yourself. Be kind to others. Stay at home.