It never rains but it pours. It had been raining all day yesterday. Just after six p.m., I was close to finishing proofreading a chapter of a new manuscript on my desktop when the electricity went off. F&%^$#! Loadshedding, I thought. When did I last save my work? Did auto-save do its job? The usual questions ran through my mind until I suddenly realised that I wasn’t sitting in the dark. The light in the room was still on … Huh?

Further investigation revealed: a seriously leaking roof, with a puddle forming in my passage. Tripped circuit breakers. My stove and the top lights were still functioning, but not a single plug in the house, including the one where the alarm system is plugged in (there is a backup battery, but only for a few hours, not an entire night … and an entire night was ahead). There was water running down my walls.

The lockdown had been hard until that moment; there had been a few times when I was in despair, but once I had assessed the latest situation and considered my options, the only thing I was capable of doing was lighting the fire in my bedroom, pouring myself a glass of red wine and panicking. On the edge of utter despair.

What to do? I bet you are saying: phone an electrician. Nah! say I. I phoned my Mom. Just telling her what’d happened was a relief. She then got Krystian to phone me and he talked me through the practical side of the situation. He is an electrician, among his many talents. In the meantime, my love had also phoned, and with their help and through a thorough inspection of the situation, I realised that there was still one plug on the property that was functioning: in the garage. Well …

The main objective was to reconnect the alarm to the grid for the night before an electrician could be phoned in the morning (my previous experiences of getting help after hours had been unsuccessful, to say the least, so I did not want to even go that route of begging and sheer frustration; not last night …).

The garage is a separate building on the property, with meters of ground in between the building and the house. The rain was coming down in buckets. But this house and I have been through a lot over the last fifteen years, so I was ready: extension chords galore. Who cares about getting soaked and masking extension chords with leaves and mud in the rain? (I was scared that if discovered, the chord could be cut and I would be a sitting duck again.) Eventually, I reconnected the alarm, made dinner, had more wine in front of the fire, showered, delighting in the hot water (not knowing whether there would still be warm water in the morning as I had no easy way of checking whether the geyser was still on) and SLEPT. A bit. For the rest of the night, Harry kept me company.

First thing in the morning, I searched for more extension chords and reconnected my desktop computer and the modem, so that I could get work-in-progress onto my laptop, write an automatic reply message on my email account, inform a few people I am working with on different projects about my situation and then shut down everything in that room to use the chord to reconnect the fridge in the kitchen. It had been off all night long.

On the phone, my usual electrician said Monday, earliest. He couldn’t recommend anyone else. BUT the good old Yellow Pages could. An electrician in the neighbourhood! Yes, they would make a plan to fit me in later in the day. I made another fire and got some work done and then just camped out in front of the fireplace waiting for the phone to ring. 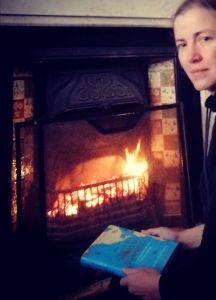 An then my love phoned to warn me about loadshedding … The real deal this time. I looked up, rolled my eyes and asked, ‘Really?’

I phoned Mom. And Krystian. It helped to talk while waiting for the electrician to arrive.

Just before loadshedding was supposed to begin, two masked, super-friendly gentlemen arrived on my doorstep and got to work: within minutes, they restored power to the whole house, secured the grid from the leak, showed me what to do to keep safe and on their way out, discovering in the course of our conversation that my garage door battery wasn’t working during loadshedding anymore, replaced that too. Five minutes before the power was supposed to go off! I would have hugged them if we hadn’t just danced around one another, physical distancing in masks to protect ourselves. They wished me a safe, good weekend. I was nearly making marriage proposals, but I bet these two are already taken.

Back inside the house, I settled in front of the fire and waited. And waited …

After half an hour of pointless waiting for the lights to go off again, there was only one thing left for me to do: remove the network of extension chords from all around the house and switch on the electric blanket in my bed. 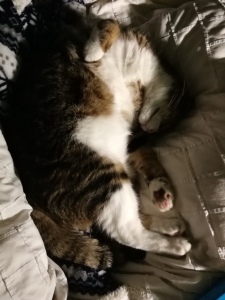 I have been in bed with The Cats ever since, reading books and watching silly YouTube videos on my laptop. The fire is still going strong. The rain is falling. The alarm is on. There are new towels in the passage just in case of further roof leaking. And there is red wine. I am emotionally drained.

P.S. A dear friend just texted to inquire whether I was all right. She was worried why I hadn’t written the Oysterhood post yesterday. I adore my Friends. With people like this in my life, I can even face faux-loadshedding.