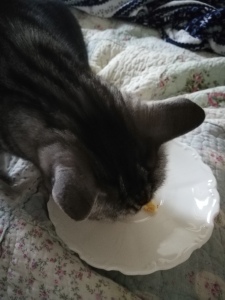 Home: having rusks with Glinka in the morning.

When I had my car accident four years ago, after the initial shock, as the pains and bruises developed slowly all over, I kept discovering new injuries to my body in the days following the crash. And so it is this time. At first, I thought that I only had a few scratches on my right arm. Then the swelling and bruises made their appearance. This morning, I discovered a scratch on my left arm that wasn’t painful at all, but it was there, unmistakable. And I spotted the horrible bruises on my lower back and my behind only this evening after my shower (I have lower back problems so often that I did not even think that the two could be connected this time).

Typing in an ordinary position is painful, so I had to get creative today, but only because I was forced to. I meant to rest all day long, but it wasn’t possible.

The gradual unfolding of the damage to my body after the impact of the sea wave as it threw me against the rocks the other day is a strangely fitting metaphor for what I have seen develop on one of the projects I am involved in. Another party involved, apparently with no integrity, had impacted the project in ways that I am only gradually discovering as the bruises and pains appear all over the project’s body. I am beginning to see why the project had been hurting for a while. And today, after discovering yet another scratch, I felt compelled to do something to defend it against further damage.

Sometimes anger allows you to suppress pain and fight when the cause is worth it. This one certainly was. And, I was livid. But I also feel a deep sadness. And, I think I am still in shock. Lack of integrity is like a wave that will unexpectedly take away the ground from underneath your feet and throw you against rocks. It takes a lot of effort to survive and get back on your feet and fight for what is right. And sometimes, all of it hurts like hell, but it has to be done.

My body, and so much more, needs rest.