A small but very enthusiastic crowd gathered earlier today at the Protea Bookshop in Rondebosch for my “homecoming launch” of Invisible Others. Thank you to everyone who made this one so special!

The first copies of Invisible Others at Protea Bookshop in Rondebosch, photo by Roma Szczurek

The shop is beginning to feel like an extension of our lounge. As Johan from the shop remarked, it is located almost in our backyard. I will never forget the first time I browsed there. I think it was Del who asked me whether I needed help. I was looking for a collection of stories by Etgar Keret. The bookshop did not have a copy. I bought another book and then forgot about the Keret. About two weeks later, I was done shopping at the centre and was putting some groceries into my car, parked in the vicinity of the shop, when Del recognised me and came out to say that they now had the Keret book I had been looking for the other day. Did I want to have a look at it?
Of course I did, and I was very impressed by such kindness and service. It is always a pleasure to go back to a bookshop where people care and know about books (which is not a given nowadays – I once had to spell Nadine Gordimer’s name at a bookshop…). 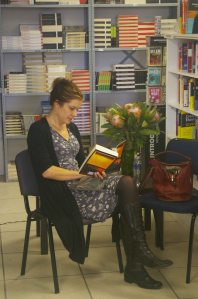 Emma after the launch, reading Siri Hustvedt’s The Blazing World

Today at the launch, I had the honour of being interviewed by the wonderful author Emma van der Vliet. We spoke about the influence of film on Invisible Others, particularly the 1992 film Damage, staring Juliette Binoche and Jeremy Irons. Often when I write, individual scenes come to me in the form of film-like images and the medium is an inspiration for my work. There is one line in Damage which I found haunting: “Damaged people are dangerous; they know they can survive.” Konrad reflects on it in the novel. We also discussed how the novel began, how the main characters formed in my head, and how Cara refused to be written the way I’d first imagined her. The first images of Konrad I had in my mind were connected to a jersey a hitchhiker my Mom and I picked up in Poland many, many years ago wore. The young man told us he’d knitted the jersey himself. Konrad, also an avid hitchhiker in his youth, owns a jersey like that in the novel. Emma also asked about my writing process. When I was still working on my thesis about Nadine Gordimer’s post-apartheid writing, I found many references to her strict schedule of devoting the mornings to her stories. Inspired, I tried to do the same, only to discover that I could not write one decent sentence in the mornings. (Recently, a friend gave me a sign I love for my kitchen: “I don’t do mornings”.) I am an afternoon person. My best time for writing is after lunch and coffee, that is when I am at my most prolific and inventive. 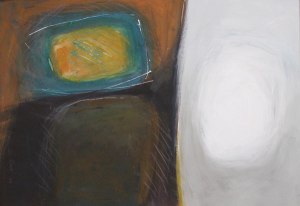 It was great to see Renée le Roux at the launch whose amazing artwork has been an inspiration for Dagmar’s art in the novel. Before encountering Renée’s work, I couldn’t find a way of responding to abstract art, but the first time I stood in a room full of her paintings I understood and felt what abstract art was about. It was such a thrill and discovery. Her images spoke to me like no other. Her “Mommy’s Boys” are in my study and despite their sadness, make me smile every day.

Thank you to everyone else who was there!

This is the launch cake which Emma and I enjoyed for our breakfast after the talk. The woman who baked it is going to hear from me soon. It is always good to know where to get a divine chocolate cake, definitely one of my all-time favourites.

Thank you for this delicious literary treat: launch, cake and all!