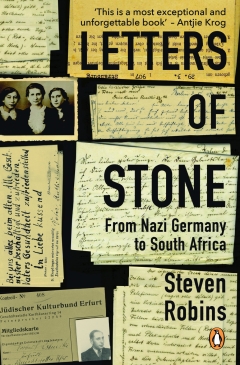 Reading about the Holocaust is never easy. Facing its terrible truths, especially when your own family is involved, is heroic.

Anthropologist Steven Robins had no inkling of what he would unearth when he embarked on a quest to discover more about the three women in an old photograph that had sat in his childhood home for years. He was born in 1959 in Port Elizabeth. He and his brother Michael grew up oblivious to their Polish and German ancestry and to the fates of their father’s relatives during the Third Reich.

The journey Robins takes in Letters of Stone connects “different times and places”. It is a journey that took nearly three decades to complete – between the time Robins interviewed his father in Port Elizabeth in 1989 and the publication of this astounding book. To begin with, Robins had very little to go on. But a series of uncanny coincidences led him further into the labyrinth of the private history of his family, and beyond.