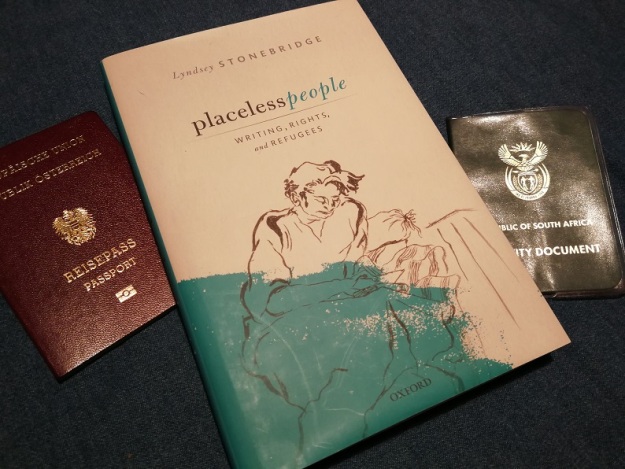 Throughout the ages, humans have been migrating across the globe; it is ingrained in our nature. Depending on time, place, and reason, these individual or mass movements of people have been welcomed or deplored by others. But being a refugee has never been easy. When you are forced to leave your home country and seek refuge elsewhere, whatever initiated the journey is usually only half of the ordeal you are facing – the uncertainty on the other side can be as daunting, if not more so.

Timely, succinct, and deeply moving, Lyndsey Stonebridge’s Placeless People: Writing, Rights, and Refugees throws a light on a topic that is constantly in the news and, whether we like it or not, often on our doorsteps.

Having spent quite some time in refugee camps as a child, I am aware far too intimately what it means not to have a country to belong to and a people to call your own. I thought that I knew what there was to be known about this topic, but Stonebridge’s research and take on placelessness and its consequences on the lives of millions of people scattered around the world today exposed my own ignorance and made me reconsider many long-standing beliefs.

The crisis we are confronting in the twenty-first century is, as Stonebridge shows, “in reality not a refugee crisis, but a crisis of moral and political citizenship”. Going back in time and examining creative responses to placelessness, as well as the legal and socio-historical frameworks which shaped the concept, Stonebridge delivers an unsettling account of who we are.

Placeless People is a powerful call to arms against “today’s toxic mess of bile bureaucracy, bad faith politics, and ethno-nationalist posturing.” It is an invitation to rethink what it means to be human in today’s shifting landscapes of uncertainty.

Review first published in the Cape Times on 29 March 2019.