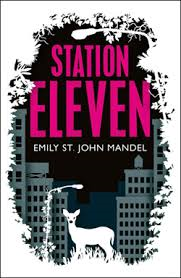 Within a short period of time a lethal flu wipes out 99% of the world’s population. Civilisation as we know it grinds to an abrupt halt. Station Eleven tells the story of a handful of survivors of the mayhem which ensues. At its centre is the resourceful Kirsten of the Travelling Symphony, a group of actors and musicians performing Shakespeare.

Spanning a few decades before and after the collapse, Mandel draws a bleak picture of humanity, but the darkness is penetrated by flashes of light and goodwill. Creativity, art, self-expression pave the way to society’s precarious rebirth as the individual characters realise how strongly the drive to be remembered is anchored within them. A thrilling page-turner which is simultaneously though-provoking and entertaining, Station Eleven is being deservedly compared to the likes of Margaret Atwood. This is speculative fiction at its best.