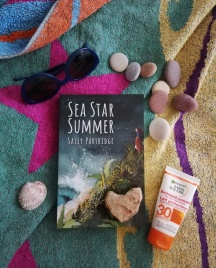 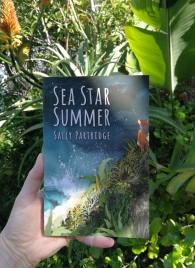 The award-winning YA author, Sally Partridge, has been writing about the trials and turbulences of growing up since her debut novel, The Goblet Club, in 2007.

Partridge’s latest novel for young adults, Sea Star Summer, is her seventh and tells the story of the sixteen-year-old Naomi on holiday with her parents in Jeffreys Bay, where all she wants to do is enjoy some solitude and read good books. Yet, a dashing but dubious local surfer, another unusual and wonderful holidaymaker called Elize, and her intriguing brother, have other plans in store for Naomi. There is nothing more magical than falling in love for the first time. Equally magical can be reading about it in a novel when the book manages to capture, as Sea Star Summer does, that unforgettable and intoxicating mixture of wonder, revelation, anxiety and possibility that is young love.

“There’s only one person out there, a dark-haired girl about my age, kicking her feet through the incoming tide. The way she’s laughing and shrieking, clearly in a world of her own, makes it look like she’s having a great time. I envy her lack of inhibition. If it was me, I’d be worried about who’s watching.” This is how Naomi first encounters Elize. Meeting her sets in motion a chain of events and discoveries that allows Naomi not only to find herself and what she wants, but also to find the courage to proclaim it, even if only softly, to the world.

“Even the sea and sky seem larger, more real than before, like I’ve been walking around half asleep this whole time and have only just woken up.” The sea moods and beach adventures of Jeffreys Bay are vividly portrayed in this sensitive and empowering story that will appeal to young people and those young at heart alike.

Review first published in the Cape Times on 14 August 2020.