In the night of 9 February 2016, on the twelfth anniversary of my first arrival in Cape Town, I dreamt that I was in a hospital. In my dream, André died there. A few days later I came to pick up his belongings, but no one was willing to assist me. They shoved me around the place, ignoring my distress. I felt desperate, lost. I wanted to take care of his possessions but nobody was keen to help me. And then out of the blue someone offered support. I woke up, relieved.

I signed the contract for my memoir about the relationship I had with André, The Fifth Mrs Brink, that morning. Afterwards, I returned home to find that our grandfather clock had stopped working without any apparent reason. I got it going again, but both the dream and the silent clock disturbed me.

In the late afternoon, on my way to a book launch, I had a terrible car accident in which I killed our beloved Brink Mobil, the ancient green Mercedes André and I used to drive. My friends told me later that I did not kill the Old Lady, that she died protecting me. I couldn’t get rid of the feeling that having the accident on the same day I signed the contract was a sign, signalling some kind of closure or an impending massacre. I hoped for the former, but had no way of knowing which it would be.

Three weeks later, I walked across the city to pick up a rental car provided by my insurance company. Passing the accident spot on an overhead bridge, I could still see the rust-red stains where the Brink Mobil had bled to death.

I walked past the funeral parlour where they took André after his death – he did not die in a hospital but on board of an aeroplane flying over Brazzaville.

I also passed a big red building in Woodstock which caught my eye because it looked quite new and impressive. I considered getting a coffee from a place on its ground floor.

Woodstock is where long ago I once appeared on a friend’s doorstep in one of her dreams. She told me the next day that I’d looked lost and just stood there, clutching a book to my chest. The same friend works in the big red building now.

I finished the first draft of The Fifth Mrs Brink in July. In September, I asked for the rights to my book back. I had to leave; I had no way of staying. If I wanted to truly take care of my and André’s stories, I had to find a home for them elsewhere. I submitted my memoir to another publishing house. They made me an offer. My new publisher gave me a book she thought might interest me: Second-Hand Time by Svetlana Alexievich, an account of how people survive, and make sense of, tyranny and massacres – by weaving tapestries of stories to keep us safe at night. The words of Second-Hand Time live in my bones.

In the evening of the 1st of November, someone asked me online which great writer I would like to have tea with. There is only one: The One. He liked his tea white with two sugars. And when he wanted to spoil me, he baked scones for us for breakfast. 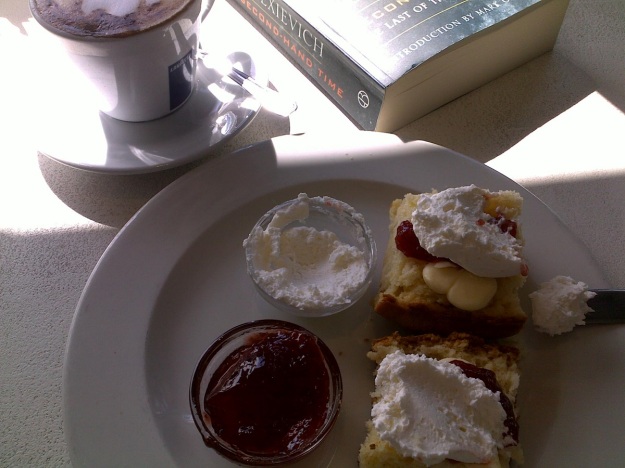 I don’t know what I dreamt in the night of the 1st of November, but I know I slept through it. That in itself is a gift, a good omen. Uninterrupted sleep had become rare in the past few months, although I am mastering it again. In the morning of the 2nd, I had a scone at my favourite coffee shop. I drove to Woodstock in the little car that a friend lent me after my accident. I parked underneath the big red building, found my way upstairs to the 4th floor where kind people were waiting.

It is perhaps fitting that the publication of The Fifth Mrs Brink will be delayed by a few months next year to coincide with the 30th anniversary of the first time I became a refugee when my family escaped the tyranny of Communist Poland and sought asylum in Austria.

Arriving on the doorstep of Jonathan Ball Publishers, I felt like a refugee who had sailed through treacherous waters in a derelict dinghy and found her way to the shores of a safe haven. With only my ancient fountain pen in the bag I carried, I was seeking asylum again.

Massacres and tyranny can be intimate, private, go nearly unnoticed.

I am not the only one who survives by telling stories.

My stories are safe now.*

*Sadly, they actually weren’t. Almost two years later, I know beyond a shadow of a doubt that as long as greed, and not integrity, governs people’s decisions, your stories will never be safe with them. But my stories will always be mine to tell and I intend to continue telling them, with integrity… (18 September 2018).

“This is what matters: to say ‘no’ in the face of the certitudes of power.” (André Brink)

“Perhaps all one can really hope for, all I am entitled to, is no more than this: to write it down. To report what I know. So that it will not be possible for any man ever to say again: I knew nothing about it.” (André Brink)

9 thoughts on “Stories with strawberry jam and clotted cream”