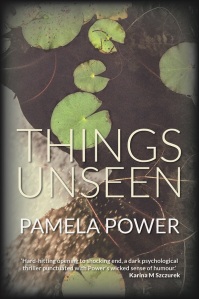 Founded and headed by author Sarah McGregor, Clockwork Books is a new independent local publisher with a growing list of fascinating titles. Its latest release is Pamela Power’s second novel, Things Unseen, a psychological thriller set in the posh suburbs of Johannesburg. I first read it in manuscript form, and remember that I had to pause and take a deep breath after the shocking violence of the opening scene in which we witness the terrifying demise of a person and an animal. Let’s just say that the rest of the book is also not for sissies.

Not at first glance, but the following chapters are perhaps just as disturbing as the beginning. The novel attempts to describe the kind of violence which is nearly imperceptible to outsiders – emotional and psychological violence. We meet Emma and her husband Rick at their university reunion. Emma works for a local theatre company and she is friends with her boss Gay and her partner Sophie, a psychologist. Rick is an ambitious gynaecologist with a roving eye who treats Emma like a trophy, not a wife. She is aware of his numerous affairs, but turns a blind eye until she encounters Craig, her first big love, at the event. He is visiting from the UK where he’d settled many years ago. Faced with the question of what could have been, Emma begins to re-examine her life.

All is brought to an abrupt end the evening of the reunion when Emma, distressed about not being able to reach her mother nor their domestic worker Lizzie on their phones, abandons the alumni gathering and rushes back to discover her mother brutally murdered in their home, a mansion on a vast property meant for a large family with kids. Despite many attempts, Emma and Rick are childless. Their infertility is a source of great distress to Emma. The couple drifts further apart during the murder investigation and the tensions between them escalate upon the arrival of Ross, Emma’s troubled brother who lives in Australia. Emma is convinced that the main suspect in their mother’s murder – their gardener who is missing – could not be responsible for the gruesome deed although most clues point to the contrary. When her mother’s lawyer explains the unexpected wishes of the dead woman to her family, everyone is taken by surprise. And then Emma encounters a sickly sweet smell in their garden and the events of the night of the murder take on another evil twist.

Craig, a former policeman turned security expert, assists Emma in her search for truth. She refuses to look at the facts alone when her gut feeling tells her that they simply do not make sense. Craig trusts her intuition and applies his investigative skills to help her. Everything becomes even more complicated when they rediscovers their long-buried feelings for each other and begin falling in love again.

The main narrative is interspersed with a sequence of dark images from the past which gradually reveal the portrayal of the horrendous abuse of a child. It is clear that the child grew up to be one of the protagonists, an innocent victim turned ruthless perpetrator, but Power keeps the plot cards close to her chest and has the reader guessing who did what until the spectacular showdown at the very end.

Things Unseen is a fast-paced, haunting thriller which addresses our most intimate fears of invasions and violations in the context of present-day crime realities of the country, but also free of the socio-political context. What Emma and her family members experience could happen to anyone anywhere in the world. The challenges of the betrayals and losses she faces in her marriage will be known to many women, independent of race and class. The madness of grief and the inability to make sane choices when you are in its grips are part of the story. And Johannesburg, with all its social woes, is very much a character in the novel. Readers will recognise the everyday realities of the upper-middle-classes – the glamour and the horror of the rich and beautiful – but these form only part of the narrative drive, not a closer study of the underlying societal struggles.

Power is a scriptwriter and editor. Her dialogues are vivid, her characters are recognisable, and feel real. She has a wicked sense of humour which shines through despite the sombre themes. At the heart of her novel is a love story, a woman’s quest to reclaim and follow her dreams despite the horrific circumstances she finds herself in. Emma is surrounded by a tightly knit group of friends who help her to pull through and pursue her own path towards fulfilment. The characters grow on one as the story progresses and one can only hope for a sequel.

Things Unseen will appeal to readers who like to get lost in a good yarn. I can imagine that many will want to finish it in one sitting, so perhaps start reading when you have a nice pot of tea or a glass of wine ready on standby and know that, if you wish, you can disappear for a few hours into the world of Things Unseen.