The Blessed Girl is Angela Makholwa’s fourth novel. Although it was published only a few weeks ago, it has already gone into its second print run and I have an idea it is not going to be its last. The book sheds light on a phenomenon which has moved into the public eye in the last couple of years: the life of a blessee (usually a woman “who lives a luxurious lifestyle funded by an older, sometimes married partner in return for sexual favours” and who flashes that lifestyle on social media) and her blessers (the sponsors of that lifestyle and recipients of the sexual favours).

In interviews, Makholwa has stated that she did a lot of research into these opulent lifestyles and has spoken to people involved first-hand, even registering for a website which connects potential blessees with their blessers. The outcome is an authentic portrayal of the scene. Makholwa’s wit will make you laugh but while entertaining, she incisively delves into the much darker aspects of her story than the glitter lives of her characters would suggest on the surface. The Blessed Girl reads like chick-lit and does what the best of its kind achieve: for all its humour and light touches, it is a very serious analysis of the topic at hand.

Bontle Tau is the narrator of the novel and the blessee who seems to have it all: she is not even thirty, has the looks of a supermodel, owns her own penthouse apartment, drives a luxury car, throws money around on fancy restaurants, beauty treatments and designer goods like there is no tomorrow. She is offered business opportunities most of us can only dream of. It all comes at a price, of course. She is at the beck and call of her three main blessers who are all older, married, more or less affluent, and use her as they please. But she wants us to believe that it is all worth it, that she is the one exploiting others, not the other way around.

Bontle is not the kind of woman you would necessarily want to be friends with, and Makholwa makes sure that we know not to trust all that her protagonist is trying to sell to us, but she gives Bontle a voice that is genuine and thus allows us to care for her in a manner which surprised me. As the story progresses and Bontle’s seemingly charmed life unravels on the pages in front of us, it is nearly impossible not to feel empathy for the young woman as she makes her choices and deals with the ones forced on her. Makholwa paints a credible, moving backstory for her which explains Bontle’s position in life. It fills you with sorrow and anger. The ending of The Blessed Girl looked predictable at times, but Makholwa managed to surprise and I appreciated the unusual way Bontle’s fate unfolded. A book of our times; not to be missed. 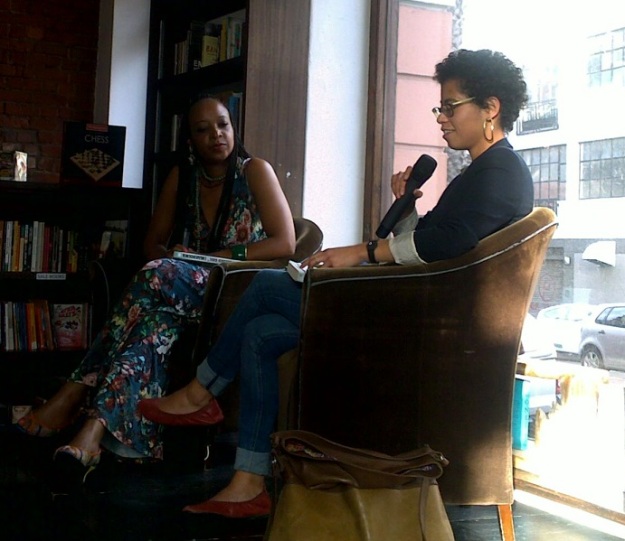 Angela Makholwa and Lauren Smith at the launch of The Blessed Girl at the Book Lounge.