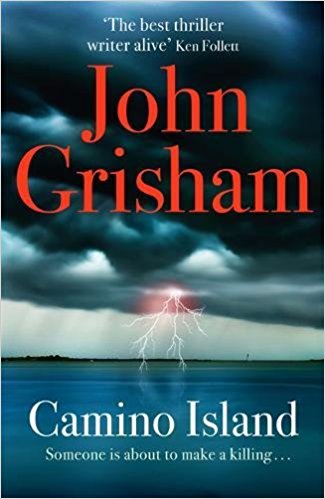 John Grisham has published two dozen books since I last read him at university. His The Partner was my introduction to the thriller genre and, thinking back to the impact the brilliant twist at the end of the novel had on me, I still think I could not have asked for a better one. Twenty years on, and I still remember the shock and delight of the final revelation. Grisham had me fooled as much as the main character had been fooled by the real “partner” of the story. I read some of his other titles at the time, have watched a few of the films based on his books since then and loved all, but have not longed to return to reading Grisham until recently. The premise of Camino Island sounded too intriguing for a reader and writer like me to resist. Once again, Grisham did not disappoint.

This crime thriller is set in a world which will feel familiar to anyone who has ever been interested in the secret lives of books. How they are written, when do their manuscripts become precious and why, how do they change hands when they are published and when does their possession become a criminal offense are only some of the questions that perhaps not all readers ask themselves, but Camino Island answers in the most entertaining fashion. The story is relatively simple: the priceless manuscripts of F. Scott Fitzgerald’s five only novels are stolen from the Princeton University during a nearly perfectly executed heist. The opening chapters focus on the tense choreography of the criminal plan. A single drop of blood from one of the thieves leads to the first arrests of suspects, but they refuse to talk to the authorities and the trail to the missing treasure goes dead.

The FBI’s Rare Asset Recovery Unit is doing its best to find the manuscripts insured at a value of $25 million – the amount at stake for the prestigious insurance company which has to pay out if the goods are not recovered. Working closely with the FBI, Elaine Shelby begins an investigation on their behalf. Her approach boarders on illegal, but seems to have been far more effective in the past than official routes, and her latest plan looks like it might have a chance to succeed again.

Elaine recruits Mercer Mann, the protagonist of Camino Island, to spy on Bruce Kable, a bookshop owner located on the titular island in Florida and suspected of dealing in stolen rare books and manuscripts. The Fitzgerald originals are believed to be in his hands.

Mercer is a young, talented writer with a crippling university debt to pay off and on the verge of losing her job. She has a short-story collection and a highly acclaimed novel to her name, but has been experiencing a few years of a creative drought since her last publication and is desperate to write again. To escape her predicament she agrees to help Elaine who makes her a financial offer she can hardly refuse in her situation. She returns to Camino Island where she used to visit her beloved grandmother every summer when she was a child and where she still part-owns the cottage which she inherited when the grandmother died eleven years ago. Mercer’s assignment is to start on her second novel, get close to the other writers based on the island and, most importantly, to the mysterious bookseller at the centre of the literary community. Elaine hopes that Mercer can infiltrate the island’s literary scene in time to discover whether Bruce Kable is somehow involved with the disappearance of the Fitzgerald manuscripts and whether they are indeed hidden somewhere on the island.

A cat and mouse game ensues. No one knows whom to trust and what to do. And the people initially responsible for the theft of the irreplaceable manuscripts and not apprehended by the FBI are following their own agenda. They will stop at nothing to get their share of the millions the manuscripts are estimated to be worth on the black market.

Grisham delivers what he is famous for: the ultimate page-turner. I found myself as much involved with the plot as with the lives of his fascinating characters: the struggling writer who can’t make ends meet, longing “for the freedom of facing each day with nothing to do but write her novels and stories”, but aware that she might be selling her soul to the devil in order to achieve her dream; the bookseller who knows how to charm and satisfy his customers so as not to only stay in business but to prosper; his highly successful wife who spends a lot of time in France searching for antiques she sells on to discerning American buyers and seems to have no qualms about her own or her husband’s infidelities; the two gay women known for their bestselling romance novels and their writer friend whose new manuscript promises to be a flop while alcoholism threatens to destroy him; or the sly agent working around the clock to retrieve the stolen goods as her boss is liable to cover the insurance claim in case she fails.

What I do not recollect from my initial reading of Grisham twenty or so years ago is whether the prose of the early novels was as bland as this recent offering. There was not a single exceptional sentence in Camino Island that would have made me wonder at the ingenuity of the writer. Having experienced the stylistic prowess of a thriller writer like Mick Herron in the past few months, I was particularly struck how unappealing Grisham’s was in this respect. And yet, I confess to not having been able to put the novel down. Camino Island was great fun and it made me want to catch up on my Grisham reading. Apparently his next legal thriller, The Rooster Bar, is already in the bookshops. Exciting holiday read guaranteed.