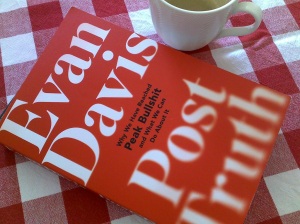 Thinking about any kind of deceit, I always remember my mother’s explanation of the circumstances when lying is acceptable. I was still quite young and she told me that when one of my family members (today a strikingly attractive woman) was born, she looked like a rat. Although all could see the resemblance, everyone commented on the cuteness of the child at the time. In Polish, this is also called a white lie. It is a form of bullshit, but it is not only socially acceptable, but an indication of good manners. In his Post-Truth: Why We Have Reached Peak Bullshit and What Can We Do About It, the journalist and BBC presenter Evan Davis gives another such example: being polite by lying about the deliciousness of the burned pudding your host serves you for dinner.

White lies can be considered innocent, but the trouble with our present reality, as Davis states, is that it has become exceptionally swamped by the kind of bullshit that is truly threatening. Unsurprisingly, Trump and Brexit feature prominently between the covers of Post-Truth.

Davis speaks about the “two things that underlie a lot of bullshit”: it is “a form of communication that is, loosely speaking, too cheap to properly distinguish a genuine and a fake message”, and it suggests “some misalignment of interests that gives reason for someone to be a fake in the first place.” The latter is especially fascinating, and Davis shows that the manner of how and by whom bullshit is delivered can communicate something of importance that is more reliable as an act of communication than the message itself.

I was mostly captivated by the second part of the book’s subtitle, wanting a guide on how to discriminate between the bullshit we are constantly bombarded with and messages of proper value. Forms of mendacity Davis discusses are “readily apparent to anyone who cares to notice… Their transparency gives rise to one of the mysteries of modern communication: why peddle this stuff if we can all see through it?” Curiosity, doubt, and experience enable us to develop and train pretty dependable bullshit detectors. But bullshit can be so insidious that it escapes even the most watchful eyes. The advice Davis offers against falling for it is often intuitive, and once you read it, it seems pretty self-evident, and yet it is hard to formulate it as succinctly and coherently as Davis does. Contemplating the research and examples he provides you see how aptly he pours those intuitions into words.

Davis proposes two vital questions that should be posed of any message out there to determine what we are dealing with: “does the communicator have an interest in directly deceiving, or in trying to impress? And does the way they have tried to persuade us they are honest and genuine really show that they mean what they say?”

In his research, Davis delves into the human psyche and delivers some home truths about our behaviour: “As part of the mental process of self-justification that we all engage in when we do something wrong, the near-lie offers comfort. It assuages guilt, allowing the perpetrator the self-respect of being able to say to themselves that no lie was told. Let’s admit it: we have all been there, we have all taken advantage of that distinction at some point.”

Writing about the dangers of “the rhetoric of politicians, populists or demagogues”, Davis points out that the worst of them “make successful appeals to anger and fear, frame problems in terms of one group versus another and wrap their worldview up in appealing stories that have a distorted plausibility.” Sadly, his kind of communication will be all too familiar to South Africans. “The techniques of propagandists have been well studied and it is hard to be comfortable with them.”

It seems so easy to abuse our emotions when anger and fear are in play. To guard against such exploitation, as Robert Schindler put it to Davis: “The thing that needs to be fixed is for people to be more in touch with their feelings… If you’re in touch with your feelings you’re better able to handle people trying to influence you by those feelings. You know what’s happening and you can decide whether to act on it or not.” As Davis states, there are occasions when we do not mind having our feelings manipulated and he gives the example of “tear-jerking Christmas ads”, but on the whole it is wise to interrogate those feelings and intuitions rigorously. A Christmas ad is one thing, Newspeak is another.

Whether in politics, advertisement, journalism or social media, we have reached overwhelming levels of deception in the public space. Calculating the price of a communication is an intriguing way of discerning what is worthwhile because “useful signals tend to be expensive” and “by contrast bullshit as a phenomenon is characterised by its cheapness. Words cost nothing to say and so have limited power is helping us to distinguish between the genuine and the fake.”

Despite the mostly grim topic, there is a lot of humour in Post-Truth and I found myself chuckling along the way. I had a really good laugh at a tongue-in-cheek self-reflective comment about endnotes in an endnote to Chapter 3, referring to the form of bullshit they can be indicative of. The book prompts you to interrogate your own forms of communication, not only those of others. Having been tortured by the bullshitting jargon of academia for many years (and Davis extends revealing comments about the meaning of tertiary education degrees), I repeatedly thought of the philosopher Karl Popper and his view that “aiming at simplicity and lucidity is a moral duty of all intellectuals: lack of clarity is a sin, and pretentiousness is a crime.” What I appreciated most about Post-Truth was that it never gave the impression that the author was trying to peddle anything to me. The book is accessible, entertaining and highly informative.

Post-Truth: Why We Have Reached Peak Bullshit and What Can We Do About It