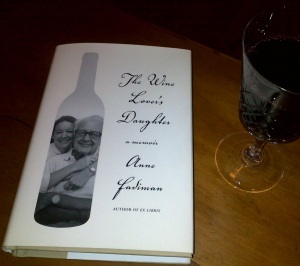 Anyone who has read Anne Fadiman before will know what to expect of her latest book, The Wine Lover’s Daughter: A Memoir – excellent writing. I adore her work. It engages, soothes and delights me. She could write about any topic and I would want to read what she has to say. Her superb The Spirit Catches You and You Fall Down: A Hmong Child, Her American Doctors, and the Collision of Two Cultures (1997) is one of the most insightful renderings of the challenges which people encounter across cultures and languages. She is a master of the familiar essay. Book lovers will remember her marvellous Ex Libris: Confessions of a Common Reader (1998), Fadiman’s declaration of love for the written word.

Writing about your family members can be daunting, not a task to be undertaken lightly. Fadiman does it with wit and style. The Wine Lover’s Daughter is another of Fadiman’s declarations of love – the one she feels for her late father, the formidable Clifton Fadiman whose life spanned most of the twentieth century. A man of letters, an extraordinary editor, a famous radio and television personality, Clifton Fadiman was also known as a wine connoisseur and collector who drank half a bottle – seldom less or more – every night at dinner time until he was well into his nineties. “He once said that the cork was one of three inventions that had proved unequivocally beneficial to the human race. (The others were the wheel and Kleenex.)”

In remembering the life of her remarkable father, Fadiman does not gloss over the uncomfortable flaws of his character. This is true love, warts and all. She writes with compassion and humour, drawing a picture of a man who was deeply ashamed of his roots and desperate to escape them: “as a young man he had looked around him and realized that things were run by people who spoke well and who were not Jewish, not poor, and not ugly. He couldn’t become a gentile, but there was nothing to stop him from acquiring money and perfect language. The ugliness was a self-deprecatory exaggeration.” He was hard-working and on a mission: he did not want to be a “meatball”, transforming diligently “into something approximating foie gras.”

His family was worried about him when he was growing up, “since all he seemed able to do was read.” But that passion led him straight to the offices of the prestigious publisher Simon & Schuster, where he remained for most of his life. He was conservative in many ways but never adverse to dialogue, reshaping his views as the world around him was changing. He allowed his children to find their own ways. His daughter’s journey included coming to terms with the fact that, although she followed in his footsteps as a writer, wine did not agree with her palate.

The Wine Lover’s Daughter is a literary treat of note. Tender and generous, it will go well with half a bottle of your favourite vintage.

The Wine Lover’s Daughter: A Memoir