I have been worried about this since the declaration of the state of disaster: online predators. Not even the real thing, the ruthless psychopath that will target you when you are at your most vulnerable and drop a nuclear bomb in the centre of your life (those too, but they ALWAYS pose a threat). I am specifically thinking of the seemingly benign kind, the ones just looking for a bit of a thrill because, you know, life under lockdown is suddenly too boring for them.

An example. At the beginning of the lockdown, I wrote online that I was anxious (understandably so). Someone who had tried his luck a few times before, but always understood when to back off, suddenly offered his ear (via DM, of course), in case I needed to talk. Still giving him the benefit of the doubt, I politely said thank you, but did not make use of the offer and did not engage further. Two days later, out of the blue, a blatant attempt at flirting followed (via DM again). I shut it down immediately. But if I didn’t? What if I had fallen for the lame compliments and the fake sudden interest in my well-being?

Then the real offer of help: Two days ago, I wrote something online that could have been interpreted as me feeling ill. A woman, on the open timeline, for everyone to see, offered her assistance and her ear if I needed to chat via DM. When I sent her a DM saying thank you and explaining that I was actually fine, she said she was relieved to hear, and that she understood I lived on my own, and she gave me her phone number just in case, wishing me well. And that was that. A genuine offer of assistance, all done in the open. She was fine with me dialling the number she gave me at any moment, obviously knowing that she would not have to hide the fact from anyone around her. No weirdness, no secrecy, no threat.

Many of us are anxious right now, many of us are open about it online; there is nothing wrong with that. There are many kind, beautiful people out there who are willing to interact, exchange, have fun together without ulterior motives. They won’t slide into your DMs with lame excuses, so that they can have a little bit of fun with you at your cost and drop you like a hot potato when they feel like it. They will have no problem with engaging with you openly for all to see. There is no reason not to express interest or delight in what others are doing, but if you really mean it, and if you have nothing to hide, do it openly. If an exchange via private messages is needed, that’s also fine. But if you truly care, keep it appropriate, say what you really mean. Otherwise: fuck off.

I hate to think how many people are signaling distress right now and are going to be targeted by predators who don’t have any scruples. And I understand that there are many lonely, bored people out there. And they might be fine with some online flirting, but there are appropriate and respectful ways of initiating such exchanges.

With that preamble out of the way, let me signal some more distress and not have to worry about some creep initiating inappropriate advances… I warn you, I am protected by lionesses!

Salieri is a wonderful nurse. She spent most of the morning purring on my cramping, sore tummy. We had a terrible night, had to take painkillers sometime after midnight, but did not want to continue with them before breakfast. And breakfast was sweet delight. My freshly delivered strawberries with a little bit of leftover cream and condensed milk in the company of Vincent.

The beautiful spoon was a gift from my love when we travelled together two years ago. We both love museum shops.

I did not get out of bed until around 1pm again. Read most of the time, on paper and online. Eventually, hunger called, so I got up, ate a simple lunch, showered, washed my hair and decided to dry it while doing my garden loop walk. This time the reward was a Smartie after every three rounds. The small packet of Smarties contained seventeen, so fifty-one loops, with four steps up and four steps down at the two ends of the stoep, and a knee bend after each Smartie. 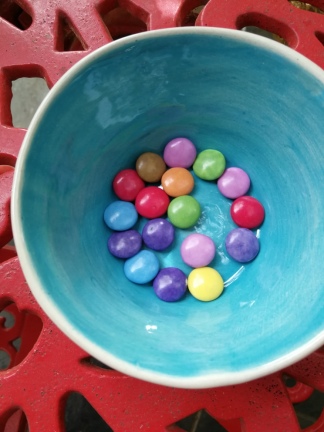 I did some laundry, cleaned up in the kitchen and then contemplated opening a bottle of rosé and a new book, but decided that despite feeling really sorry for myself for most of the day, I actually needed to do some work again.

So I did a gentle edit (Salieri assisting) of a short story left in my care and sent it to the author for comment. In the meantime, I had a small dinner (the rest of the bratwurst, this time ‘brat’ed in the pan) outside on the step with Mozart. I watched the sun setting and the sky doing its colour thing, and Mozart offered me his ears to scratch and rubbed against my legs as he always does when he is pleased to sense me in the garden.

Today, one could watch sleeping lions on Wild Earth.

And the Emily Dickinson Museum is offering virtual tours of Emily’s bedroom. I have been there in person, and nothing will ever be able to replace the experience, but this is not a bad second. The beautiful scarf on her bed, the small desk on which she wrote her poetry…

I spent some time in this virtual space and felt inspired, calmed, more human.

Be kind to yourself. Be kind to others. Stay at home. Don’t let the online predators get you!