Where does sanity end and insanity begin?

Can anyone who intentionally kills or violates another person be thought of as sane?

Earlier today while driving, I saw a man, probably homeless, standing next to a garbage bin and talking to himself. It might have been the same man who a few months ago passed me in the street and out of the blue started screaming at me, forcing me off the pavement into heavy traffic. I was fortunate that cars avoided hitting me just in time. I wasn’t hurt, but petrified. I haven’t walked that route since.

I still like walking in our neighbourhood though, and do it nearly daily (it helps to keep me sane).

There were times this year when I did not feel sane myself. Grief is not a mental illness, but it is a state of vulnerability that makes you often act insane. I have experienced some really mad stuff since February. There were days when I thought of Valkenberg, and the idea seemed strangely serene. There are times in one’s life where all you want to do is lie down and let others take care of you. Just some peace and quiet, punctuated by kindness. We all have moments when we long for such spaces.

I finished reading Mark Winkler’s second novel, Wasted (Kwela, 2015), this morning, hence all these thoughts about in/sanity. I picked up the book because of the excellent story Winkler contributed to Water: New Fiction from Africa (forthcoming from Short Story Day Africa). I felt this was an author I wanted to get to know better. I have not been disappointed. Wasted is one of the best novels I have read this year. Well written (with an opening that is impossible to resist, and a middle and end that are even better), tense, darkly humorous, unpredictable and thought-provoking throughout, Wasted is one of those novels that creep under your skin. It strikes an admirable balance between seriousness and entertainment. Winkler manages to pull off that tough task of making you care for quite an unsavoury protagonist: Nathan Lucius is an enigma for most of the book and one approaches the unfolding of his story with trepidation, but you simply need to know what makes him tick.

We know he sleeps with the light on, has a dubious approach towards personal hygiene, does not allow anyone into the sanctuary of his flat where he collects old photographs of strangers he imagines as members of his family, and his relationships with his work colleagues, his widowed neighbour, a friend suffering from cancer, and his real family are unusual (if that is the right word), to say the least. The why behind his behaviour comes as quite a shock around two-thirds into the novel. But even earlier, around one-third into it, we come to the first unsettling revelation. The ending blows your mind.

What fascinates me about the novel is the portrayal of this character who is so recognisable and yet so foreign. You read along, and, if you’re honest, you allow yourself to realise that, yeah, I have done some similarly crazy shit, and, yeah, I have had similarly dark thoughts. The lights, the solitude, the blackouts, longing for forgetting, incapability of dealing with the frustrations of the everyday – been there, done that (perhaps not exactly to such extremes, but the point is that one can associate with it). Not wanting to spoil the surprise, let me just say that fortunately most of us don’t end up like Nathan. But it is a fine line that we all tread. That is what makes him such a great character. It’s easy to feel him.

Winkler is also the author of An Exceptionally Simple Theory of Absolutely Everything (Kwela, 2013) that I hope to get my hands on tomorrow at the celebration of The Book Lounge’s 8th birthday party. Wow, time does fly! Allow me to hope that it heals, too.

I have been following Rachel Carrera’s Blog for nearly as long as I have been writing my own here at WordPress. Rachel is always witty and informative, whether sharing stories about her family (human & feline) and living with autism, interviewing authors, congratulating authors on their birthdays or inventing games her readers can participate in. I love hopping over to her blog to see what she is up to and it is always a pleasure to find one of her posts in my Reader. One day I hope to read one of her novels.

In one of her posts she mentioned that her birthday was on the 22nd of December.

Many Happy Returns! For your birthday I wish you health, happiness & the publication of one of your novels. May you have a wonderful day & a great year ahead.

Thank you for sharing & all the fun,
Karina 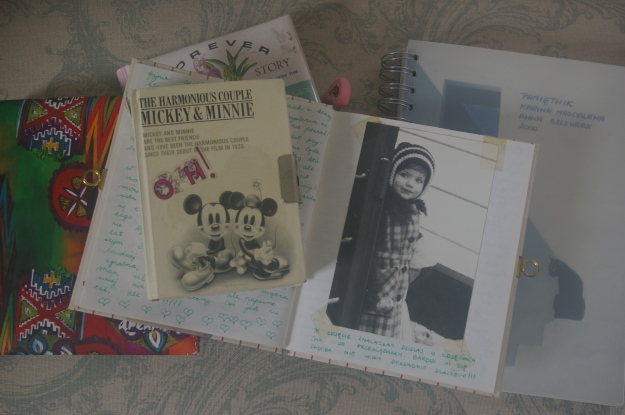 What pleasure to open a daily newspaper to two pages devoted only to writing and reading! Especially in times when less and less space is spared for such ‘archaic’ occupations. The Cape Times‘ book page(s) appear(s) every Friday. Yesterday, a full spread was filled with reviews, book marks, information about upcoming literary events, and a heart-warming article by Katie Grant about The Great Diary Project.

I began keeping a diary in 1989. The first one was a Mickey Mouse journal with a lock. I got it from one of my Dad’s (he used to be a coach) cyclists and his girlfriend for my 12th birthday. There was also a matching fountain pen which my brother still feels sorry about accidently destroying a few years later. I started the diary on 29 January, a day after my birthday, and wrote about the party, the cake my Mom baked (the entry includes a surprisingly accurate sketch of the leftovers), and a line about how strange it was to be a twelve-year-old girl.

Since then I have filled many other diaries, all of which I have with me in my study in Cape Town. I read some of the entries today and can’t stop smiling and blushing – that kiss on a park bench near my high school, that longing and the confusion, that first break-up with all the door slamming and high drama, or all that sand in my hair after a night on the beach with R and my Mom’s loaded silence when I slipped back into our guesthouse room in the early morning hours – it’s all there, not necessarily only in words, somehow dormant and forgotten, and yet immediately brought back to life the moment I begin reading… The smell of the Baltic Sea during that rainy summer. I would never have been able to remember most of it. But the diaries hold all my former selves and remind me why I still feel that Wednesdays are special, why I love getting handwritten letters, why that particular shade of blue, or why chocolate flavour.