‘Rubbish!’ Nkosi spat out. Drunk, he stood before Zuki with crumpled Christmas gift paper piling around his naked feet. He tossed the last of the presents, still partly wrapped, across the room. ‘Rich people’s rubbish,’ he hissed and fell back on his bed. A few seconds later he began to snore.

Zuki surveyed the scene before her. Nkosi had just come back from one of his ‘trips to town’, as he and his buddies called their looting excursions to the affluent suburbs of the city. They never went for anything big, specialising in petty crime only. But the last trip had been a total disappointment. They’d cruised for hours without an opportunity presenting itself until, at last, they saw a woman put a heavy box into the boot of her 4×4 and return to her house without locking the car. Nkosi grabbed the box and they made their escape. At least that is what Zuki had gathered from her brother’s earlier rant.

Now, the contents of the box lay strewn in front of her and Zuki felt a pang of guilt when she imagined how it would feel to discover the box gone. She picked up a piece of the Christmas paper which had landed near the door. Half a gift card was still attached to it. Zuki fingered it and straightened out the wrapping around it. One by one, Zuki traced the letters with her forefinger, deciphering them with some effort and pronouncing them softly under her breath: ‘TO KRISTIN AND WIGGO FROM…’ The giver’s name was missing.

Zuki crouched and retrieved the object which had so infuriated her brother. She hugged the stolen present to her chest. On tiptoe she made her way back to the sofa in the front of the house where she slept. The air was stagnant with the summer heat. Her father was asleep in the only other room.

The full moon illuminated the sofa through the window. Once settled, Zuki finished unwrapping the present and found herself staring into the lovely face of the American First Lady whom she’d recently seen on TV during the coverage of the her husband’s re-election campaign. She suddenly realised that she hadn’t properly held a book since dropping out of school three years ago when her mother died and Zuki took over her work as a char at Ms Murray’s. Ms Murray had shelves and shelves of books in her house, but Zuki only ever approached them with a feather duster. 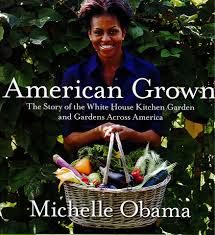 Pointing out the letters with her finger, Zuki gradually made out the title of the book and smiled. On the cover, Mrs Obama held a basket full of vegetables in all the colours of the rainbow. Even though Zuki did not recognise most of the vegetables, the picture made her mouth water. Especially the cucumber. In summer, Ms Murray often made cucumber sandwiches for her tea and always shared them with Zuki.

Inside the book, Zuki found many more photographs of Mrs Obama, surrounded by children, working in a garden, all busy with wheelbarrows and spades and rakes, then proudly showing off their vegetables in front of the camera. The people in the book appeared so relaxed and happy.

Zuki hadn’t known happiness since her mother’s death. Although it was difficult to admit, deep down inside she knew that her father was a drunk, her brother a chancer, and that her mother died because her father ordered her to visit a witchdoctor when she discovered lumps in her breast, instead of taking her to a clinic. But Zuki preferred not to dwell on things beyond her control. She was grateful for a roof over her head and didn’t mind giving most of her earnings to her father, just as long as he left her enough to feed them all. Even if what they could afford was mostly umngqusho or rice.

In one of the photographs, Mrs Obama was crouching next to a patch of plants Zuki did not recognise. The small-print text next to the picture looked daunting. At the top of the page, spelling the words carefully to herself, Zuki could make out a caption: “How Times Have Changed”.

In her dreams that night Zuki was in a garden and suddenly found herself face to face with the First Lady who held out to her a funny-shaped, purple vegetable. ‘Do you know what this is?’ Mrs Obama asked her. Zuki had to shake her head.

Waking up she felt her stomach grumble. Her dream made her feel ashamed. She hid Mrs Obama’s book under her sofa.

At work that day, Ms Murray was surprised to find Zuki paging through the commemorative U.S. election special issue of Time magazine. Ms Murray had not liked the idea of Zuki being torn out of school to work for her, but understood the situation and was glad that there had been at least something she could do for the family when her mother passed away. Zuki had never complained or indicated that she missed school, so it somehow surprised Ms Murray to see her looking so intently at the magazine in front of her, pointing, and mouthing the letters which stood to attention before her nail. She was so absorbed that in answer to Ms Murray’s hello she jumped up from her chair, spilling the remains of her tea over the magazine.

‘I didn’t mean to scare you,’ Ms Murray said and turned on the kettle.

Apologising, Zuki started wiping off her tea from the full-spread picture of the American First Family.

‘Don’t worry,’ her employer assured her. ‘I’m finished with it. You are welcome to have it when it’s dry.’

‘Are you happy that Obama was re-elected?’ Ms Murray asked unexpectedly. They had never talked politics before.

‘But you are interested to find out, I see.’

‘But you seem eager to?’

Zuki remembered the book at home and nodded again.

‘You know, I could help you,’ Ms Murray said. ‘Would you like that?’ she added carefully.

Zuki raised her eyes. In them Ms Murray found her answer.

In the afternoon, still glowing from the offer, Zuki went outside with a cool drink for Ms Murray’s gardener.

‘Do you mind if I take some of these home?’ she asked, pointing at some plants which resembled the ones she remembered from Mrs Obama’s book.

Alone on her sofa late that night, Zuki opened Mrs Obama’s garden book and held the thyme and rosemary twigs close to her nose. She smelled change in the palm of her hand.

Originally published as “Mevrou Obama se tuin” in By on 21 December 2013. 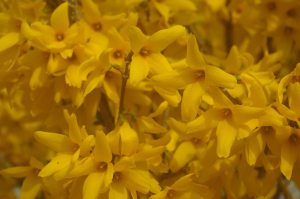 My Mom has green fingers, and I am certain that her toes are green, too. Ever since I can remember, our house was full of plants and flowers. Often, they did not belong to her, but were only staying with us like guests at a spa or clinic, for treatment or convalescence. Wherever we lived, people soon came to realise that my Mom could heal or bring back to life the most neglected, suffering plant. And she could never say no to an abandoned philodendron or cactus. I haven’t inherited her gift, but I do try to keep my wild garden in Rosebank, Cape Town, happy. My Dad always said that one has to reach a certain inner maturity to garden happily and successfully. Not sure about the successfully, but there is happiness all around. Perhaps I am gradually getting there?
I recently visited my Mom in Uttendorf, Upper Austria, and took a few photographs of the flowers in her garden. Spring at her most beautiful!