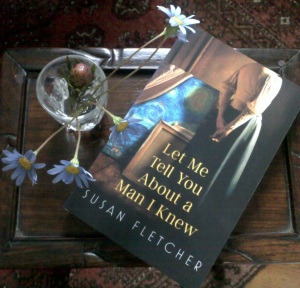 I welcome every Susan Fletcher novel with open arms. Let Me Tell You About a Man I Knew is her sixth. It completely delivers on the promise of its predecessors. Set in the Provencal town of Saint-Rémy where Vincent van Gogh spent a year of his life in an asylum and painted some of his most widely recognised works, the novel tells the story of a local woman whose life is disrupted by the arrival of the Dutch painter. Jeanne Trabuc is the wife of the asylum’s warden. In her fifties, a mother of three, she goes about her daily routines, remembering her adventurous youth and watching out for the mistral, “wind of change, of shallow sleep.”

Something about her husband’s latest patient unsettles Jeanne. Her curiosity about the man who is known for having harmed himself and for having appeared naked in public leads Jeanne to break her husband’s rules about not visiting the asylum or engaging with any of its patients. She goes to meet the fascinating stranger and a tentative friendship develops between them. Jeanne makes it possible for Vincent to leave the asylum to paint: “And he walks, Jeanne thinks, as reapers walk back from their trees: a sense of a day’s work done. And does he glance at the white-painted cottage as he goes? Jeanne likes to think he does. A glance, as if in gratitude. This newly untethered bird of blue overalls and gold.” She recognises his talent, believes in his sanity. He in turn reawakens her senses and long forgotten dreams.

Jeanne thinks of her grown-up sons who are making a way in the world for themselves and her friend Laure whose desire for freedom had led her to abandon her husband. She recalls the crippled woman who took care of her when Jeanne’s mother died after giving birth to her. And her loving father whom Jeanne nursed towards the end of his life after he’d suffered a stroke.

As a young woman, Jeanne had “been bold, reckless. Not caring for rules.” She’d once stood half-naked in the yard, “her wet hair, like a wing”, and understood the freedom and power of such exposure. Now, her body ageing, her marriage empty of tenderness, she realises that there is still something that she wants from fate, and it is not what she has, “a little life of washtubs and duty.”

Let Me Tell You About a Man I Knew is a story about change and courage, about breaking silences and not being afraid to reach out for what we expect from the people we share our existence with. Fletcher’s portrayal of Jeanne’s awakening is subtle and profoundly moving.

Fletcher’s prose is mesmerising, seductive. There is no other way of putting it. She paints emotions with sensitive strokes, but in bold colours. As she caresses language, words glow under her pen. Her work is full of light and nuance. Let Me Tell You About a Man I Knew is a joy.