This morning I received the following message (in Afrikaans, nogal!):

To which I automatically replied:

And I did. Inside, was an article about Jerzy Koch’s A History of South African Literature: Afrikaans Literature 17th – 19th Centuries (Van Schaik, 2015).

The article and our exchange reminded me of something I wrote for Die Burger in 2008.

There is only a handful of people in his home country with whom the Pole Professor Jerzy Koch can easily converse in the language which over the last fifteen years has become his great linguistic passion – Afrikaans. His home in Wrocław in the South of Poland is perhaps the only place in the country where one will be welcomed with homemade bobotie and some biltong which always features on his shopping list whenever he visits South Africa.

When he is here, people are pleasantly surprised with his fluent and articulate Afrikaans and his incredibly diverse knowledge of local culture, literature and history. Koch’s work forms one of the strongest cultural and intellectual bridges between Poland and South Africa, and between the two languages, Polish and Afrikaans.

Suitably, his African adventure began with magic. Sometime in the 1980s, with his students of German, Koch was celebrating Andrzejki (St Andrew’s Day). According to Polish tradition, he poured some beeswax through the hole of a key into a bowl of cold water. The ensuing wax figurine, which was to foretell his future, was interpreted as having the shape of either a heart or of Africa. Not surprisingly, a few years later, Koch lost his heart to Africa when, after completing his doctorate at the Belgian Catholic University of Leuven, he participated in a conference in Potchefstroom in 1992.

In the introduction of his latest book, Hottentot Venus and Other Essays on South African Literature (published in Polish by Dialog, 2008), he recalls his fascination with South Africa of the early 1990s: “The fact that the transition in Poland was happening at the same time as the South African one made interest in South Africa, at least in my eyes, obvious.” 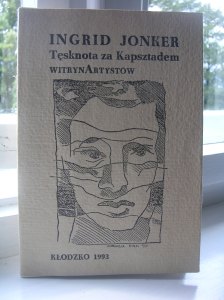 In 1993, our paths crossed for the first time in the most unusual manner and unbeknown to both of us at the time. After Daniel Hugo recited some of Ingrid Jonker’s verses to him at Three Anchor Bay, Koch translated a selection of Jonker’s poetry from Afrikaans into Polish. The volume was edited and published by WitrynArtystów, a small publishing house run by none other than my uncle, Bogusław Michnik. Jonker’s poetry collection was most likely the first book ever translated from Afrikaans into Polish. It is one of numerous translations from Dutch and Afrikaans for which Koch received the Martinus Nijhoffprijs in 1995.

Jerzy Koch is also the author of several monographs and numerous articles on South African literature in general, and Afrikaans literature in particular. 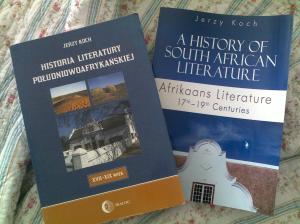 His previous book of local interest, History of South African Literature: Afrikaans Literature – 17th-19th Century, published in Polish in 2004, was the first study of its kind written by a non-South African for a non-South African audience. It is comprehensive, wonderfully illustrated history of Afrikaans literature which is an excellent point of entry for Polish students of South African studies at two Polish universities, University of Wrocław and the Adam Mickiewicz University in Poznań, where Koch introduced this particular field of inquiry. In translation, it might offer an inspirationally fresh look at literary history for Afrikaans speakers.

Koch is currently working on the sequel to this publication, a history of twenty-century Afrikaans literature and on the first Afrikaans-Polish dictionary, apparently the fourth ever bilingual dictionary that includes Afrikaans. He is also editor of the annual publication Werkwinkel: Journal of Low Countries and South African Studies. Its third issue on its way to us as I write.

Jerzy Koch, André and I in Stellenbosch in 2006.

In South Africa, he is presently a research fellow at the UFS in Bloemfontein and since 2005 a member of the Suid-Afrikaanse Akademie vir Wetenskap en Kuns, an honour rarely bestowed on a foreign scholar.

Easily recognised by his old-fashioned, long, curled moustache, Jerzy Koch was, fittingly, the first person I ever spoke Polish to in South Africa when we met at last in person in 2006 during one of his visits to the Cape. Ever since I came to live here myself in 2005 I have been absorbing Afrikaans. One day, Jerzy Koch and I will have a conversation in Afrikaans about Langenhoven. We share a passion for this country, its people and their cultural treasures, believing that it is of the utmost importance to forge understanding between peoples through explorations of the unknown with the help of the known. And a little bit of magic. 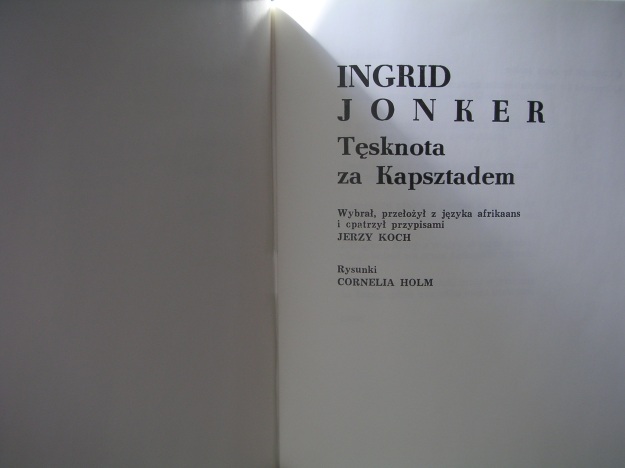 (When André and I first visited my uncle who published Tęsknota za Kapsztadem, he proudly presented the volume to us, not in the least aware of the connection between Ingrid Jonker and André. He was just proud of having published a South African author in translation. I remember I had tears in my eyes when he handed the book over to us and I paged through it, looking for a poem dedicated to André. I found one, pointed at the dedication and then at André, and said to my uncle in Polish: “It’s the same person, you know.” Tears flooded all our eyes. Magic. And Jerzy and I texting to each other in Afrikaans – that’s magic, too.)

In 2006, for a week André kept a diary for Libération. This is the first entry of the week:

A good way to start my writer’s week: at a height of 11000 metres, flying over Africa. After ten days with my fiancée in Austria, I am returning to Cape Town. After the intense green of a Europe emerging from the snow, there is the familiar patchwork of browns and ochres. Back to roots: my own, and those of humanity. I have never felt a split between Africa and Europe inside me: what for some people is an experience of cultural and moral schizophrenia, has always been for me a source of richness and discovery. Both are part of me, both feed into me, both shape me and define me. If my physical birth is linked to the arid landscape of the Orange Free State, where everything was determined by the sense of space, by the endless distance between here (wherever ‘here’ was) and the horizon, by thorn trees, and fierce sunsets, and the hard omnipresence of stone, by ‘Bushman’ engravings on rocks and the traces of ancient fossils encrusted in hard places, my emotional birth (as I have often testified) happened at the time of the Sharpeville massacre, on a bench in the Luxembourg Garden.

And here Africa is below me again, its contours softened by distance, its suffering made dream-like, its cruelties and deprivations obscured by haze. Which seems like a metaphor for the distance and the haze that all too often, for all too many people, hide or distort the stark facts of the continent from the European gaze. How easy it is to see Africa as a scene of hopeless misery, a history of loss and failure, a disgrace to humanity. And yet this is where we all have our origin. This seemingly barren, useless tract of earth is our common mother; her vastness and relentlessness have nourished us, and taught us to survive. And for those of us who are prepared to remove the blinkers and dark glasses that protect our spoilt eyes, she is, still, a source of generosity and understanding, forgiveness and courage and strength. And, yes, of hope. Because she guards the source of what we have in mind when we speak of ‘humanity’: the wisdom of suffering that has endured through millennia, of humour that can smile at human folly and shortsightedness, of timeless faith in a future as long and as sure as the past. After exploitation and colonisation and oppression and contempt, she is indomitable rather than hard-headed, redeemed by agony rather than immersed in self-pity, prepared to share rather than to cherish herself, not vengeful but forgiving, filled not with despair but with hope, not with passivity but with the passion of faith.

It is home, and I am heading back to it.