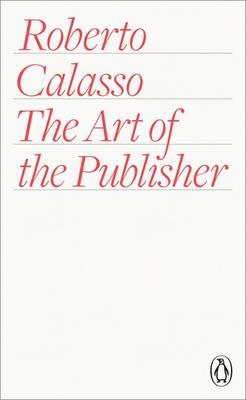 Every now and then, a book comes along which changes your life. For me, Roberto Calasso’s The Art of the Publisher is one of them. But you don’t have to be – or, like me, want to become – a book publisher to find this gem an inspiration.

For quite a while now, publishing has been steeped in a pervasive atmosphere of gloom and doom, especially in South Africa. The threat of the internet, the e-book, the retail giant Amazon, and the financial crisis have made life for the printed book difficult. Locally, a seemingly general disinterest in South African fiction and foolish political decisions have made survival tougher for our publishers, and consequently, of course, for us writers. Book sales are not encouraging. Publishers scaling down even less so. Yet, watching developments like the self-publication of Paige Nick’s latest novel, Death by Carbs, or new publishing ventures like uHlanga and Tattoo Press, I have a feeling that some creative and daring people in the country are on to something which gives me many reasons for optimism.

Roberto Calasso’s essays collected in The Art of Publishing attest to the fact that it all comes down to basics. And the basics are vision and quality. It is these two aspects of publishing that readers throughout centuries have best responded to with enthusiasm. These are no trade secrets, just simple rules which those who have been successful in publishing have always followed.

Critic, writer, and a publisher himself, Calasso has been at the forefront of Italian publishing for decades. His love for literature and the book shines through every single paragraph of The Art of Publishing. His passion is one of beauty. His insights are heartening to read.

When it matters, publishing is not about money, although, as with all art forms, moderate financial rewards cannot and should not be excluded. There are enough examples out there to prove the case. All aspects of the form play an integral part in its success: “choice and sequence of titles published…texts that accompany the books, as well as the way in which the books are presented as objects.” Calasso does not deny that this is “the most hazardous and ambitious goal for a publisher, and so it has remained for five hundred years”, but he also reminds that “literature loses all of its magic unless there’s an element of impossibility concealed deep within it.”

He goes into the fascinating history of publishing, asks what constitutes culture, celebrates the great publishers of our times, explores the relationship between the publisher and the writer, demonstrates how crucial the nourishment of writers and the care for the book as an object are to a thriving publishing environment, and most importantly, to our intellectual and emotional lives.

Calasso also shows that even if often unbeknownst to us why a particular publisher attracts our enthusiasm, as readers we understand the value of our “repeated experiences of not being disappointed.” And that is what only a publisher of vision and quality can offer.

The Art of the Publisher by Roberto Calasso

Translated from the Italian by Richard Dixon

When I truly enjoy a book I have the need to share it with others. I have already bought several copies of The Art of the Publisher for friends, two more today…

I was attracted to the book in the first place because it appealed to me as an object. I saw it displayed at the Book Lounge in Cape Town and could not walk away from it…

Another great year of reading is coming to an end, although it did not start that way. I am grateful to the love that has returned my passion for reading to me when reading – when life – became unbearable. 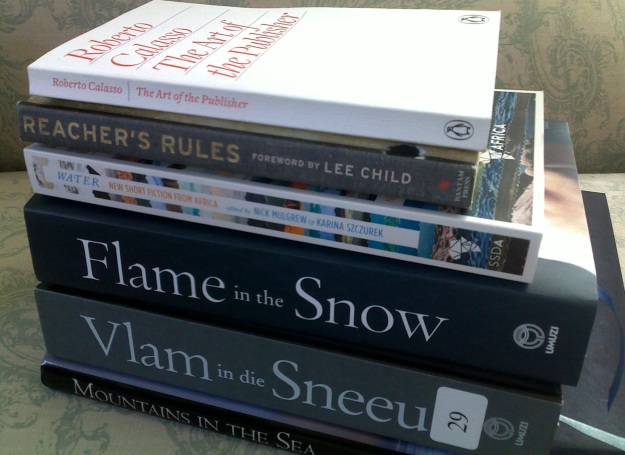 Knowing how few books one can read in a lifetime (I won’t depress you with the estimate), I have become quite selective and wise about what I read. Thus, out of the sixty-three books I have read this year (until today, some not for the first time), almost all were good, thirty-one were great – among them were a few which were life-changing – and only two I did not finish. Of these two, one was brilliant, but I was reading it on 6 February and have not been able to return to it. The other one I had wonderful hopes for, but I was so disappointed and frustrated that after a hundred pages I decided not to waste more of my time on it. In the spirit of the festive season, the perpetrator shall remain unnamed.

The great ones I have finished, I would like to divide among four categories: relevant, delightful, exquisite, and life-changing (whereas some, of course, overlap).

Relevant
Ingrid Jonker: A Biography by Louise Viljoen
Back to Angola: A Journey from War to Peace by Paul Morris
A Year of Magical Thinking by Joan Didion
J. M. Coetzee and The Life Of Writing: Face-To-Face With Time by David Attwell
Books That Matter by Marie Philip

Nor can we know ahead of the fact (and here lies the heart of the difference between grief as we imagine it and grief as it is) the unending absence that follows, the void, the very opposite of meaning, the relentless succession of moments during which we will confront the experience of meaninglessness itself.
(A Year of Magical Thinking by Joan Didion)

I had a very efficient guano maker installed in my bath.
(The Penguin Lessons by Tom Michell)

Exquisite
The Long Dry by Cynan Jones
Leaving Before the Rains Come by Alexandra Fuller
101 Detectives by Ivan Vladislavić
To Kill a Mockingbird by Harper Lee
A God in Ruins by Kate Atkinson
The Dream House by Craig Higginson
The Alphabet of the Birds by SJ Naudé
We Are All Completely Besides Ourselves by Karen Joy Fowler
Sugar Man: The Life, Death and Resurrection of Sixto Rodriguez by Stephen ‘Sugar’ Segerman and Craig Bartholomew Strydom
the myth of this is that we’re all in this together by Nick Mulgrew
Wasted by Mark Winkler
Notes from the Dementia Ward by Finuala Dowling

We have to admit our massive love for people. If we don’t ever need to know its depth, we just feel the light on the surface.
(The Long Dry by Cynan Jones)

Life-changing
Flame in the Snow / Vlam in die Sneeu by André Brink and Ingrid Jonker
Killing Floor by Lee Child
Water: New Short Fiction from Africa
Mountains in the Sea: A Celebration of the Table Mountain National Park by John Yeld and Martine Barker
The Art of the Publisher by Roberto Calasso

I would like to single out two books I haven’t written about. Yet. Kate Atkinson’s A God in Ruins and Roberto Calasso’s The Art of the Publisher.

Atkinson’s novel is one of the most exquisite books I have read in my life. Its beauty and its declaration of love for the power of literature to capture eternity, to heal, to open up spaces in us we never even knew existed are staggering. Personally, I will always associate the novel with two seminal moments in my life. While reading it during one of those serene nights when you are at peace with yourself and the world, I saw something beautiful and drew a sketch of the scene at the back of the book. It is also engraved in my heart. And when I finished A God in Ruins, I was crushed by the inability to share it with André, but then something happened which gave me comfort and hope and the book will always be at the source of these feelings when it comes to reading. I hope to write about it before the year is over.

Calasso’s book speaks about everything I have ever known, felt, dreamt about or hoped for in publishing. I have known for years that one day I would become a publisher myself. The Art of the Publisher made me realise that the time has come to make that day become reality.