I cried twice. No matter how much I tried to control myself, the tears kept coming and I was grateful for the pack of tissues I had in my handbag. I should have started shedding tears at the beginning of the event, when the woman who is our national treasure, Sindiwe Magona, noticed that we were only a few people in the audience while the whole of South Africa should have been attending. But it was only when Sixolile Mbalo, the soft-spoken, beautiful author of Dear Bullet, Or A Letter to My Shooter (2014), pointed to herself with her most articulate hands and used the possessive pronoun “my” to refer to the man who raped, shot, and left her for dead, that the dam of anguish broke inside me. In my own personal reality I speak of “my friend”, “my brother”, “my husband”. To have to survive a reality where a rapist is internalised into “my rapist” is nearly unbearable to think of, and yet, as Ekow Duker, the third panellist of the Open Book Festival event presented by Rape Crisis, mentioned, “We get more upset when our soccer team loses than when a woman is raped.” That is the reality Mbalo lives, and courageously survives, every single day of her life. All of us should take note and salute her. Any moment, her fate could become that of “our friend”, “our sister”, or “our wife”.

“Women are ghost heroes in our struggle.” – Niq Mhlongo

This year’s Open Book unfolded over five days from 17 to 21 September in Cape Town. It was filled with insight and inspiration. Apart from the moment described above, laughter dominated. The second time I shed tears, they were also an expression of joy. Speaking about her touching Good Morning, Mr Mandela (2014), Zelda la Grange told Marianne Thamm that Madiba destroyed all her defences just by holding her hand when they met. La Grange’s life bears testimony to one of Thamm’s remarks: “Mandela made us better people; that’s what good leaders do.” The conversation between these two powerhouse women was undoubtedly a highlight of the festival. Judging by the faces and comments of people present at the event, most felt its magic.

“Let it all come out and let us talk about it.” – Mandla Langa

Sixolile Mbalo’s and Zelda la Grange’s life stories capture the immense span of the spectrum of South African everyday experience. And it is essential for our humanity to pay as much attention to the one story as to the other, even though it is in our nature to gravitate towards happiness and success.

“Memory is always a fiction we tell ourselves.” – Rachel Zadok 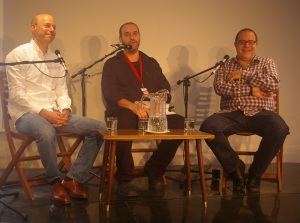 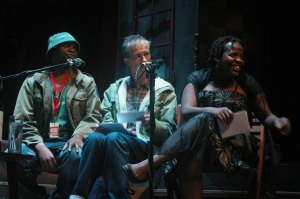 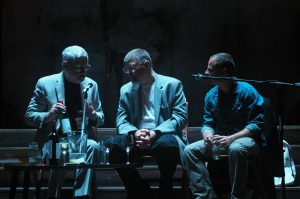 The stories in this anthology have been selected from some 150 entries submitted for the second annual Short.Sharp.Stories competition. As with all such collections, the quality of the twenty-two individual pieces varies. The authors range from first-time-published to award-winning practitioners of the genre. Additionally, in this particular case, every reader’s sexual preferences will strongly influence their reading of these diverse contributions. Sex in all its permutations is a highly personal experience, as is writing and reading about it. Hats off to the editor and all the authors for their daring explorations of the mine-fields of our sexualities.

No doubt a few of the contributions will bring many readers out of their comfort zone and will have you reading through your fingers. Others will excite you. Some will delight with their humour or tenderness. There is a lot to be learned. Who would have thought that Woolies would emerge from the anthology as the preferred place of choice for sexy lingerie shopping? Or that the smell of semen reminds some of peeled potato? I didn’t even want to know what blunt knives could be used for. Every reader will find something to please or disturb them. No matter what, brace yourself: Adults Only is one hell of ride for most of its journey.

After reading the opening story, Alex Smith’s “The Big Toad”, I knew that I would never be able to look into my kitchen cupboards without apprehension, and perhaps a tiny bit of envy. I might have to get some Jungle Oats to liven up the scene inside my predictable cupboards. Arja Salafranca’s “Post-Dated Sex” made me look at post-it notes with fresh eyes. Her story approaches that beautiful space between lovers where words “dissolve” and become something “instinctive that moves against them.” Beauty is also the subject of Donvé Lee’s “The Mirror”. Lee is the author of An Intimate War (2010), one of the most erotic local novels of recent years. Her story shines with a similar intensity and rare honesty.

The competition’s winning entry, Nick Mulgrawe’s “Turning”, is a well-written and a worthy choice, but it did not move me as much as Ken Barris’s captivating “Louka in Autumn”, or Anthony Ehler’s shattering “Breaking the Rules”, or Alexander Matthews’s illuminating “Entropy”. Efemia Chela is a young writer to watch. Her “Perigee” is as bold and astute as her recently Caine Prize-shortlisted “Chicken”. She writes a lush and supple prose that is a pleasure in itself.

The language of sexuality is a very tricky thing to master. What will arouse one person, will do nothing for another. It’s so easy to fall into clichés and vulgarity. So it was quite refreshing to smile at phrases like “sex has always been at best pedestrian – Tim walks all over me” (in Christine Coate’s “The Cat’s Wife”, a tale of a bored wife seeking out adventures which will make her fly, literally and otherwise), or to admire the eloquence with which Justine Loots describes the sadness of an encounter between a prostitute and a young inexperienced man: “One of his wings, if he has wings at all, is torn at the edge. It won’t affect his flight much, you won’t even see it, but it’s there all the same.” The magic realist twist of Loots’s story “Uncaged” brings a wonderful dimension to the entire book. Strange beasts roam the world she creates; one can never be sure who is the prey and who the predator.

Not every use of the word “cunt” will have the same impact of Ian McEwan’s Atonement. And yet I was reminded of it in Aryan Kaganof’s powerful story “Time Out With My Destiny”. With every paragraph the first-person narrator lures you in, manages to surprise and capture something unique, and ends on a shattering note. A “wow story”, my husband said when I read it aloud to him.

The stories in Adults Only capture different aspects of our relationships: from tender intimacy to raw sex, and beyond, to abuse and rape. Wamuwi Mbao’s “The Ninth Wave” tells of that moment when wanting more from a relationship breaks the little that the other is prepared to give. Alan Waters’ debut story “A Threesome in the New South Africa” recounts a hilarious encounter between a middle-aged man, his younger girlfriend, and a Rastafarian of intimidating proportions. Not every longing is clearly identifiable. In Dudumalingani Mqombothi’s “The Streetwalkers”, the search for his lost father leads a man into the arms of a sex worker.

Adults Only is a fascinating read which showcases the diversity, audacity and vibrancy of South African fiction.

A long time ago, a woman I barely knew asked me to go shopping for perfume with her. I don’t particularly enjoy shopping (books excluded). It was a small perfume shop in the Getreidegasse in Salzburg. While she was looking at the things that interested her, I glanced around. One bottle caught my attention. I sprayed some of the content on one of those paper slips they provide in these shops. The world unhinged, I lost my ability to breathe. I had to leave the shop and wait outside. For the next few days I couldn’t think straight. Eventually I gave up and bought the perfume. The smells of dry attics or cellars can also drive me literally insane. Such scents awaken longings that seem unquenchable. Words can do that, too.

When Touch was published, a journalist asked me which sense I could not imagine ever doing without. I said smell.